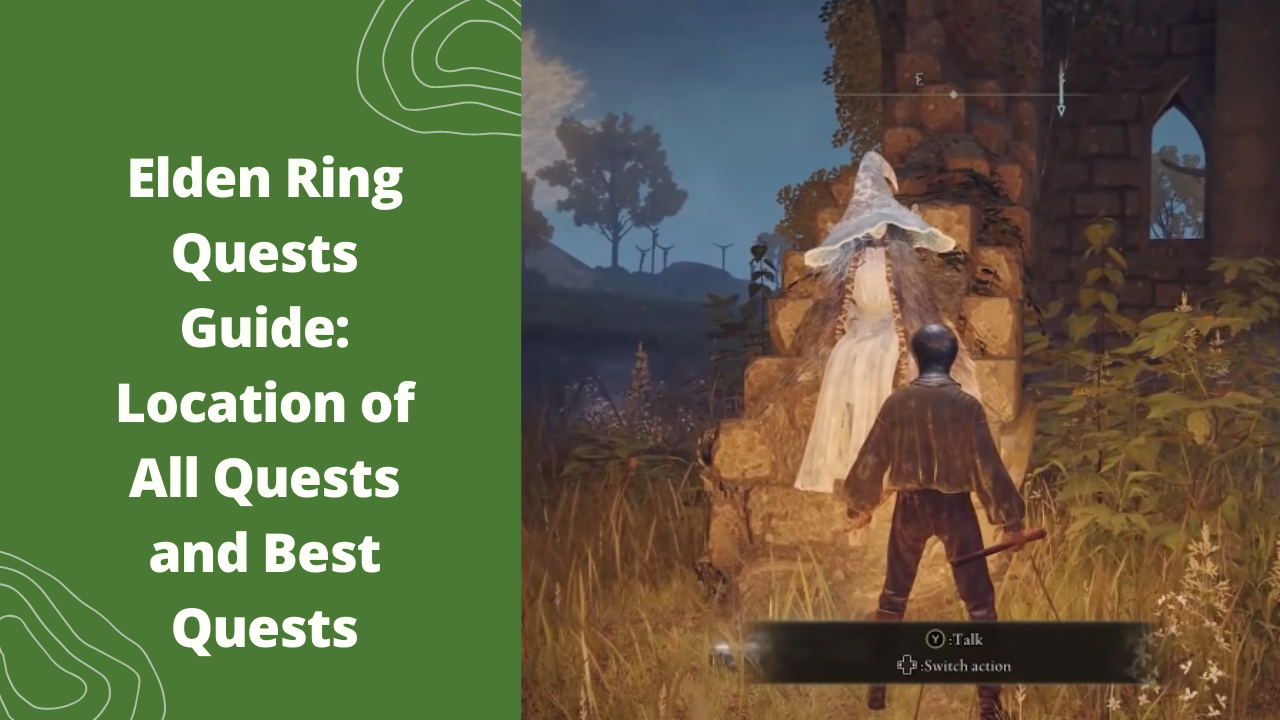 Do you want to learn more about Elden Ring’s best quests? Elden Ring has quests, just like any decent RPG, but there’s no in-game log to keep track of all the discussions you have with NPCs. There’s a potential that you’ll miss out on long quest lines with engaging stories and high-quality prizes if you don’t keep note of every NPC you deal with.

Although there are numerous critical things on the map, such as Golden Seeds and cookbooks, that can be acquired at any time, some tasks in Elden Ring are only active for a limited time. You must be careful not to skip critical elements of each quest chain by accident. If you begin a quest and end up battling one of the Elden Ring bosses without finishing a step in the chain, the quest may be automatically failed.

To make matters worse, if you manage to kill an NPC, you may unintentionally destroy an entire questline. Most NPCs aren’t aggressive right away, but they can appear to be dangerous. We entirely understand if you attack first and ask questions afterward in a game where everything is out to kill you. Here’s all you need to know about Elden Ring missions, including the best prizes, how to beg forgiveness, and more—but be warned: Elden Ring quest spoilers follow.

How To Begin: Speak to Sorceress Sellen beneath Waypoint Ruins.

How To Begin: Speak to Irina until she gives you Irina’s Letter

How To Begin: Speak to Kenneth Haight

How To Begin: Free Boc from his curse and speak to him.

*Boc periodically relocates, according to your progress through the game. He will be at the furthest location you have unlocked among these Sites of Grace:

How to Begin: Move to the Mistwood Ruins until you hear a wolf’s howl.

Note: Steps 1 through 4 are optional to Blaidd’s quest completion. However, once you start Ranni’s Quest, Blaidd will relocate, locking you out of those steps and associated rewards.

Additionally, you can check out our Best Elden Ring Quest Guide, if you want to know more about Ranni’s Questline.

How to Begin: Speak with Sorcerer Thops, after unlocking his merchant inventory.
Give him the Academy Glintstone Key (the one found in Raya Lucaria Academy).

Warning: Completing this quest will remove Thops as a merchant from the Church of Irith.

How to Begin: Spare Patches during his boss’s fight and speak to him after.

How To Begin: Speak to Ranni the Witch.

How to Begin: Speak to Rya

How to Begin: Speak to Gowry

How to Begin: Speak to D, Hunter of the Dead.Steps: Defeat Tibia Mariner in Summonwater Village. Speak with him at his new location. Visit Gurranq, Beast Clergyman, and give him at least 1 Deathroot. Speak with him at his new location, at the Roundtable Hold. Advance Fia’s Quest, until you receive the Weathered Dagger. Reload the area, then go back to where Fia was to obtain the Twinned Set and D’s Bell Bearing. Speak with D’s twin brother, and give him the Twinned Set. Return to Fia. Speak with D’s brother, who will have relocated here.

How to Begin: Speak to Diallos at Roundtable Hold

How to Begin: Speak to Preceptor Seluvis. He will ask you to take a potion to Nepheli Loux

How to Begin: Speak to Dung Eater in Roundtable Hold

Location: The Lands Between

How to Begin: Speak to Rogier in the church in Stormveil Castle.

How to Begin: Speak to Nepheli Loux in Stormveil Castle

How to Begin: Speak to Hyetta at the Lake-Facing Cliffs Site of Grace.

How to Begin: Speak with Alexander Iron Fist.

How to Begin: Speak with Bloody Finger Hunter Yura

How to Begin: Fia’s mission begins when you speak with her and allow her to hold you, albeit there is nothing else you can do after that. As soon as you exit the Hold, use the Baldachin’s Blessing item to eliminate the HP debuff penalty. After you’ve obtained two Great Runes, you’ll be able to go on to the following step. It appears that any two will suffice, such as Godrick and Rennala or Rennala and Radahn. Travel to Altus Plateau via the Grand Lift of Dectus or the tunnels, then return to the Hold after activating a Site of Grace on the Plateau.

Roderika’s quest in Elden Ring has the following rewards:

Roderika is one of the first NPCs you’ll meet in Limgrave, and she can be found lying beside a picture at Stormhill Shack. She will reward you with the Sitting Sideways gesture and the Spirit Jellyfish Ashes if you speak to her several times. Roderika has asked you to deliver a message to the Stormveil Castle chrysalids. The Chrysalids’ Memento can be found on top of a pile of corpses when you arrive at the castle.

Hand this item to Roderika before fighting Margit the Fell Omen; if she leaves the Stormhill Shack, you won’t be able to. To receive a Golden Seed, pay a visit to Roderika at the Roundtable. To activate Roderika’s new duty as an apprentice Spirit Tuner, speak with Smithing Master Hewg about her gift. Finally, when her questline is completed, she returns to the Stormhill Shack to obtain her Crimson Hood.

Patches’ quest in Elden Ring comes with the following rewards:

Make your way to the Murkwater Cave, where you’ll have to battle Bloody Finger Nerijus to gain access. Once you’re inside, you should be able to find an uncontested chest. Cloth Patches will fight you for stealing his ‘prize’ if you open it and claim the cloth garb and cloth trousers. Patches beg for pardon after losing three-quarters of his health. You can choose to kill him, but keeping him alive will reward you with the Grovel of Mercy gesture and a Golden Rune [1].

Return to Patches after leaving the area, and he will explain why he has chosen to become a trader rather than a mercenary. Spend 2,000 runes in his shop before leaving and returning. When you talk to Patches again, he’ll give you a chest; be aware, though, that this chest is a teleporter that will land you in the middle of a Limgrave forest. You should be able to get out of the area quickly without arousing any of the nearby huge bears.

When you return to Patches, he swears that he has no idea how the teleporter got into the chest in the first place. Patches go from the Murkwater Cave to the Scenic Isle Site of Grace, northwest of the Laskyar Ruins, as you progress through the globe. Patches have moved to Volcano Manor, as you can see on the map. Keep in mind that Patches’ inventory expands with each move, allowing him to acquire stronger items.

The prizes for finishing Ranni’s mission in Elden Ring are as follows:

The Dark Moon Greatsword is the best weapon for an intelligence-based construct, but it takes a lot of effort to acquire it. Renna can be found at the Church of Elleh at the start of the game, where she awards you with a Spirit Calling Bell and Lone Wolf Ashes.

The second time you see her is in Liurnia, at Ranni’s Rise, when she refers to herself as Ranni the Witch. Ranni requests that you talk with Blaidd, Seluvis, and War Counselor Iji, three ethereal beings in the tower. Ranni invites you to talk with Blaidd again near the Siofra River once you’ve finished this job because he suspects Seluvis is withholding information.

If you talk to Seluvis again, he’ll advise you to go to Limgrave and meet with Sorceress Sellen. Sellen gives you the essential artifact, Seluvis’s Introduction, and tells you that you must beat Starscourge Radahn. When you beat Radahn, a star falls south of Mistwood, revealing the Fingerslayer Blade through a portal.

Return the blade to Ranni. In exchange, she grants you the Carian Inverted Statue, which you can use to gain entry to Liurnia’s Divine Tower. This is where you’ll locate the Cursemark of Death, a crucial artifact that you’ll need later. Return to Renna’s Rise, one of the towers that became available after delivering the Fingerslayer Blade.

Go through the waygate to the Ainsel River Main Area, where the Miniature Ranni should be found. Ranni arrives at the river’s Site of Grace, telling you that her spirit is inside the doll and that you must vanquish Baleful Shadow. Make your way to Nokstella, the Eternal City, where you can face off against Blaidd’s Baleful Shadow. The Discarded Palace Key is your reward for defeating this boss.

To get the Dark Moon Ring, use your new key to open a chest in the Raya Lucaria Grand Library. Return to the Ainsel River’s Lake of Rot to find the Grand Cloister. To obtain entry to the Moonlight Alter, enter the casket inside this region and fight Astel, Naturalborn of the Void. Glintstone Dragon Adula isn’t a problem; you can skip straight through him to access the Cathedral of Manus Celes. Inside the hole, look for Ranni’s body, and a prompt to put on the Dark Moon Ring should appear. Place the ring on Ranni’s finger to liberate her spirit, and the Dark Moon Greatsword will be your reward.

Fia’s mission in Elden Ring comes with the following rewards:

Because Fia’s quest and Ranni’s quest chains are interwoven, we recommend completing both of them at the same time. Once you reach Altus Plateau, a new dialogue option with Fia arises, allowing you to speak with her in secret. She wants to return the weathered dagger to its proper owner, and it’s up to you to figure out who it belongs to. D will assume ownership of the dagger if you speak with him at the Roundtable.

Returning from a quick trip away from the Roundtable, Fia is standing over D’s body. By looting his remains, take D’s armor and bell bearing, which you can use to buy his incantations. Locate Rogier at the Roundtable Hold and chat with him several times; you may need to reload into the location until Rogier dies. The Spellblade armor set, Rogier’s Rapier +8, and Rogier’s Letter are all found on his body. According to the letter, D has a younger brother who is locked inside the Eternal City of Nokron.

When you arrive in Nokron for Ranni’s quest, you’ll discover D’s brother, who is sleeping and asking for his sibling’s armor. Before completing the rest of Ranni’s quest, hand over the twinned armor set. Navigate the Deeproot Depths until you come to Fia’s Champions. To talk to her, defeat these opponents—she will ask if you want to kill her or if you came all this way to be hugged. Tell Fia you want to hug her, and she’ll request the Cursemark of Death following your embrace. This is a necessary item for Ranni’s quest, so make sure you finish it first.

Bring Fia the Cursemark of Death to put her to sleep, but you may need to restart the region before she falls asleep. Once Fia has fallen asleep, you should be able to touch her and enter the Deathbed Dream, which will grant you access to a boss fight against the Lichdragon Fortissax. After defeating the boss, you can return to the location and sit at the Site of Grace before returning to Fia. You should look for D’s brother near Fia and kill him to restore D’s armor.