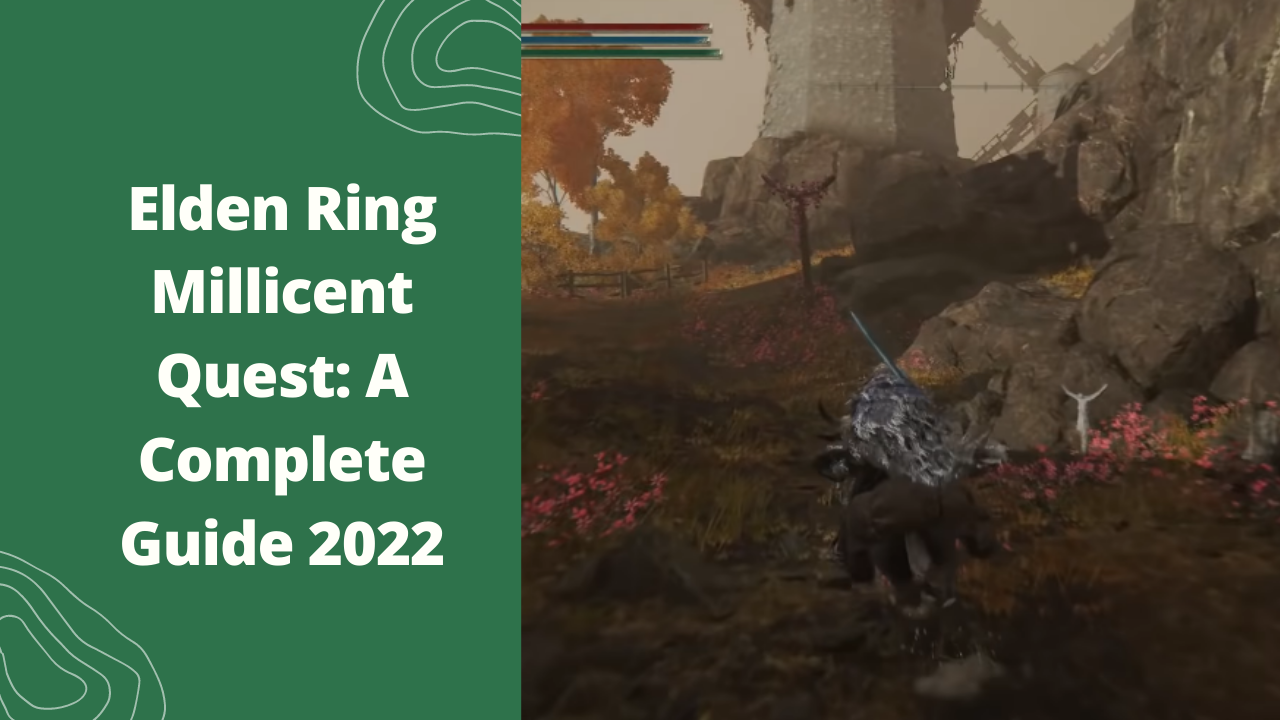 Millicent Quest, an NPC in Elden Ring’s game, has her own story that covers virtually the whole game and is crucial to one of the game’s most mysterious endings. The quest is not as straightforward as the Ranni quest; there are multiple steps and bosses to contend with, as well as a few chances to go wrong if you aren’t careful.

Millicent’s quest begins in Caelid, at Gowry’s Shack, so you’ll be able to start it right away. However, further phases will require you to have delved farther into the game, so don’t expect to finish this quickly unless you’ve already completed a significant portion of the tale. Be aware of spoilers ahead, as is customary with these types of instructions. Here’s how to finish the Elden Ring Millicent quest if you’re ready to get started.

The first stage of our trek to save Millicent takes us deep into Caelid, exactly adjacent to the red marsh that you may have encountered previously when you were trapped in Limgrave’s Dragon-Burnt Ruins by a certain trapped chest. You’re looking for Sellia, the Town of Sorcery, and a small shack belonging to a specific sage named Gowry close to the south of it.

In exchange for giving you the mysteries of Sellia, Gowry, who lives in a shack that looks like it belongs in a Fallout game, requires that you retrieve a certain needle for him. “How does this relate to Millicent?” you might wonder. Patience.

The needle can be discovered in Aeonia, the rotting swamp discussed before. A boss named Commander O’Neil can be found at the centre of the map, in a massive tangle of roots. The fight itself isn’t difficult – use a Spirit Ash to distract the commander’s henchmen, and you’ll be able to take him out in no time. He’ll drop the Unalloyed Gold Needle, in addition to his weapon, the Commander’s Standard. Return it to the sage to continue the journey’s next leg.

Gowry hands you a scrap of paper that says that you must light three beacons around the Town of Sorcery to destroy the magical barriers that are preventing you from progressing.

Going to the opposite side of town and using Torrent’s double jump to climb around on roots and roofs is the only way to get to these beacons. You shouldn’t have too much trouble getting around because it’s not a large area. In the photograph below, you can see all three beacon steeples.

Make sure to completely investigate while you’re here, since there’s some excellent loot to be obtained once the barriers are removed. If you defeat the boss through the fog gate on the northwest side of town, you’ll gain the Golden Seed, Imbued Sword Key, “Redmane” painting puzzle, Spelldrake Talisman +1, and Lusat’s Glintstone Staff.

Return to Gowry when you’re finished, and he’ll send you on your way to give Millicent the magic needle.

Travel to Sellia’s north side and exit through the back door, pausing at the Sellia Under-Stair site of grace. Millicent, our tour guide, lives in the Church of the Plague. After a short hike up the hill, you’ll reach Millicent’s home.

The Church of the Plague is guarded by two plague pests, horrible characters you’re probably familiar with, and the neighboring graveyard is full of pesky, reviving skeletons. To gain access to the church, run past the latter and bum rush the former, or take them out from afar. The church has a site of grace as well as a precious Sacred Tear for improving your flask.

Millicent is leaning against the western wall of the church, moaning. Give her the Unalloyed Gold Needle, let her rest at the location of grace, and then speak to her again. She’ll gift you the Heirloom of the Prosthesis-Wearer, a talisman that boosts dexterity. Speak to her until she begins to repeat herself, then rest at a place of grace before returning to Gowry’s Shack.

Millicent, whose memory is beginning to return, can be found at the shack. Tired of her dialogue? Leave, return, and speak to Gowry once more. If you want, he can sell you some sorceries.

The next time you see Millicent, she’ll be standing along a cliff just north of the Erdtree-Gazing Hill grace site. Shaded Castle, a medium-sized dungeon in the northern Altus Plateau, is where you’ll need to go to continue her quest. You’re looking for the Valkyrie’s Prosthesis, which may be located in a room on the castle’s northwest side guarded by a Cleanrot Knight.

Once you’ve given her the prosthesis, Millicent will go on to her next location.

Dominula, the Windmill Village, is located in the northeast portion of the Altus Plateau. It’s incredibly unsettling. Murder the insane villagers mercilessly until you encounter and defeat their leader, the Godskin Apostle, to gain access to the Windmill Heights location of grace. If you rest here long enough, Millicent will appear; finish her talk to move on.

Millicent Quest: TO THE HALIGTREE

Millicent’s next sites are beyond the capital, so if you haven’t finished the boss there yet, now is the time to do so. Furthermore, you must finally reach Miquella’s Haligtree in order to continue Millicent’s mission. If you don’t know what that is yet, you’re probably not far enough into the game to be concerned about it.

Here’s the gist of it: Meet Latenna in the Lakeside Crystal Cave after obtaining one half of the Haligtree Secret Medallion from Albus in the Albinauric Village. After defeating Morgott and reaching the Giants’ Mountaintop, meet Milllicent at the Ancient Snow Valley Ruins, a place of grace. After finishing her dialogue, travel north to Castle Sol and beat the boss there. That will give you the other half of the medallion, which you can use to get to the Haligtree path through the Grand Lift of Rold.

Millicent’s next stop is the Haligtree’s Prayer Room, Grace, in Elphael. Please be aware that this entire section is technically optional, and the opponents here are ruthless. You’ll have to walk carefully, even at high levels, to get it through.

Exhaust Millicent’s discourse once more, then go on to Elphael.

Just before the Drainage Channel site of grace, you’ll come across a massive room full of plague pests and scarlet rot-inducing swamp water on your approach to the Haligtree’s big boss, Melenia. Defeat the Ulcerated Tree Spirit that spawns in this room by crossing a root over a gap. Rest or travel quickly to a place of grace, then return to the next phase.

You’ll find two summon signals on the ground when you return to the place where you fought the Tree Spirit. Using the red sign will transport you to Millicent’s world, where you will fight her. Beating her will complete the questline and provide you with the Millicent’s Prosthesis talisman, which increases dexterity and attack power with each strike.

If you utilize the gold summon sign, on the other hand, you’ll enter Millicent’s world as a friend to assist her in fending off the Millicent’s Sisters, four red phantom invaders. This gives you the Rotten Winged Sword Insignia, a talisman that “significantly” boosts your attack power with each hit, so you can keep Millicent’s mission going.

We’re getting close to the end. If you reload the scene, Melenia will be nearby, suffering from scarlet rot once more. You have another chance to obtain Millicent’s prosthesis talisman by killing her outright at this point. If you’d rather follow the plot through to the end, simply reload the location one last time, and you’ll find her body, as well as the Unalloyed Gold Needle you found previously.

To finish Millicent’s mission, you must go past the drainage channel and battle Melenia in Haligree’s last region. She is, however, by far the hardest boss FromSoftware has ever created. To get past her mad strikes, which heal her with each stroke, you’ll need every ounce of skill and cunning you have. If your current build isn’t cutting it, you may need to respec your character.

Although there are a variety of strategies that can be used to defeat Melenia, the great majority of players lack the technical mastery required to perform anything but the most certain methods. In a nutshell, call the Mimic Tear Spirit Ash, then spam Frost and Bleed effects on her, hoping for the best. Best wishes.

After defeating Melenia, put the gold needle on the scarlet bloom in her boss’s room to obtain Miquella’s Needle, which completes Millicent’s mission.

So, how are you going to use it now? It has to do with another Elden Ring side quest, which we’ll have to tackle another time.