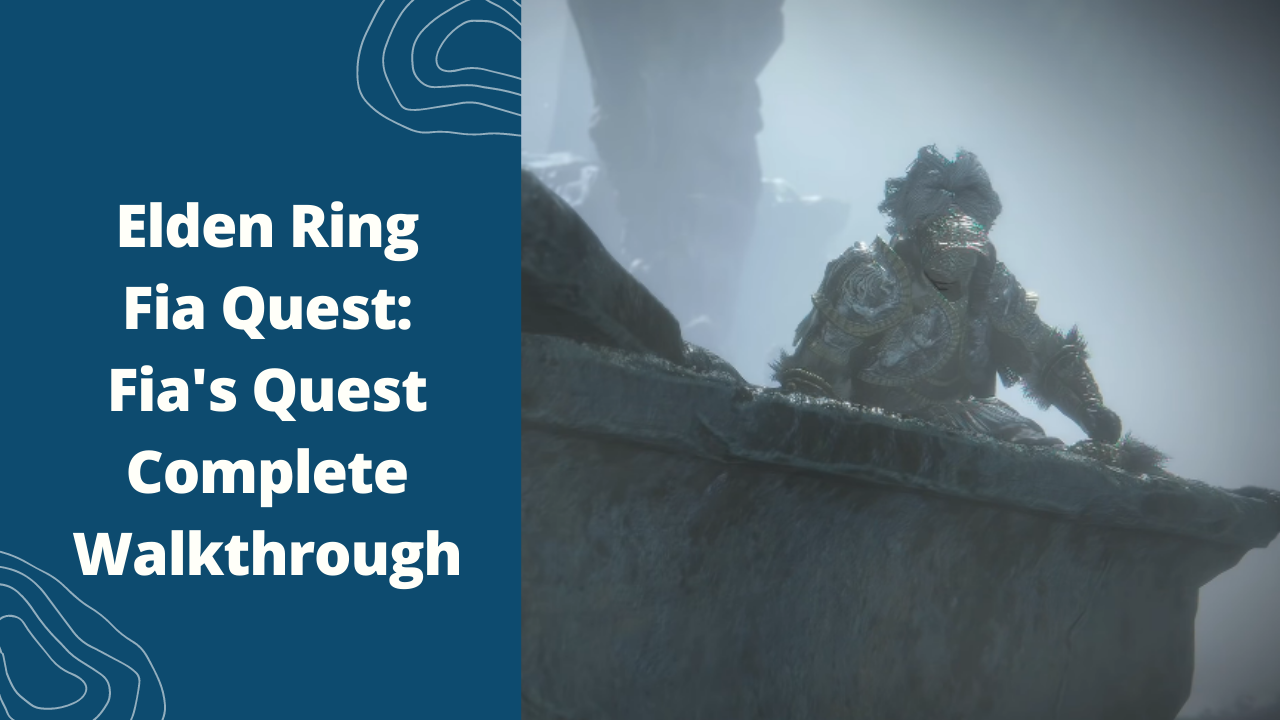 Are you unsure how to proceed with the Elden Ring Fia quest? You may have come across the deathbed companion in the Roundtable Hold and are wondering if there’s more to her than just giving out hugs and boosting your composure.

Fia’s questline, despite looks, is one of the more complex in Elden Ring, requiring you to delve into other tasks only to acquire her what she needs. It can be difficult to figure out the next step, or even to find them when they hop around the map, like with any NPC questline.

I’ll walk you through the actions you need to follow to finish Fia’s journey in this Elden Ring Fia quest guide. This guide contains late-game and ending spoilers, so if you want to discover those things for yourself, stop reading now.

Fia’s mission begins when you speak with her and allow her to hold you, albeit there is nothing else you can do after that. As soon as you exit the Hold, use the Baldachin’s Blessing item to eliminate the HP debuff penalty. After you’ve obtained two Great Runes, you’ll be able to go on to the following step. It appears that any two will suffice, such as Godrick and Rennala or Rennala and Radahn. Travel to Altus Plateau via the Grand Lift of Dectus or the tunnels, then return to the Hold after activating a Site of Grace on the Plateau.

Reconnect with Fia and let her hold you. You should have a new way to communicate with her. She’ll hand you the Weathered Dagger and ask you to restore it to its rightful owner. D, Hunter of the Dead, the Tarnished, who sits stooped over at the Table of Grace, is the owner. Hand him the knife, then quickly return to the Hold to restart the area.

D has departed, as you can see. The room where Hewg the blacksmith works at the end of the passageway is now open. Inside, Fia is standing over D’s lifeless body. Before she leaves, she’ll talk and explain her intentions. Loot D’s body for his Bell Bearing, which you can deliver to the Maiden Husks in exchange for D’s Incantations, and the Twinned Armor, which you’ll need later in the questline.

How can Fia’s mission in Elden Ring be continued?

From here, you’ll want to continue Ranni’s quest until you’ve inverted the Carian Study Hall and obtained the Cursemark of Death. Fia’s journey continues in Deeproot Depths, which demands a lot of traveling and a triumph over Radahn in Caelid. After the Radahn battle, a meteor lands in southern Mistwood, paving the way to Nokron, the Eternal City.

After arriving at the location, follow the cliffside walk beneath into the city. The trail leads to the Siofra River Depths Site of Grace, where you must battle the Mimic Tear opponent. Continue north through Nokron until you reach a cliff with a large number of jellyfish. At the cliff’s edge, there’s a little drop that leads to a tunnel that finally opens up onto a series of towers. Follow this journey until it comes to a halt at a fog barrier.

A double boss battle against two Valiant Gargoyles awaits on the other side. Magic and fire are extremely weak against these. Melee characters can use Fire Grease to imbue their weapons with fire, exploiting the latter weakness. After you’ve finished, you’ll have to make a decision about whether or not to continue.

Where can D’s brother be found in Elden Ring?

You should have found a letter from Rogier mentioning D’s twin brother if you completed Rogier’s quest. If not, the brother can still be found on the balcony outside the basin where you fight the Valiant Gargoyles in Siofra Aqueduct. You can make this decision at any time after obtaining the Twinned Armor, but it will not have any effect until you meet with Fia again.

Giving away the Twinned Armor awakens the brother, who vows to avenge his brother’s murderer. Fortunately for you, he hasn’t done it yet, so you still have time to find Fia. Some gamers claim that if you kill D outside the Hold, you can give the brother his armor and fight him without Fia dying. However, we haven’t been able to test how this works with the Weathered Dagger.

You can also simply refuse to give the brother his armor, and he will remain asleep. The only reason we can think of for giving him the armor is so that we can get Fia’s special armor once she dies.

To go to Deeproot Depths, use the Coffin

You should fight the Valiant Gargoyle monster regardless of whether you choose to leave with your Twinned Armour while meeting D’s brother. After you’ve won this battle, interact with the coffin at the far end of the arena to be taken to Leyndell, a new underground location just beneath the Capital.

To get to the Across the Roots Site of Grace on the high-up ledge overlooking the city, go to the Deeproot Depths Site of Grace and then use the big Erdtree branches that curve through the city in front of you.

Continue beyond the Across the Roots Site of Grace and across the clearing to the strange-looking huge beast on the opposite side. As you get closer, you’ll be surrounded by Fia’s champions. One will fight you first, followed by an apparition of Sorcerer Rogier, and then Lionel the Lionhearted, and two more champions will assault you all at once. Defeat each and every one of them.

Activate the Site of Grace and speak with Fia. Have her hold you and keep chatting until you receive the choice to give her the Death Cursemark. If she won’t modify her dialogue, continue speaking with her or restart the area. You’ll eventually come across her sleeping next to a body. When you interact with her, you’ll be sent to the Deathbed Dream, where you’ll face up against Lichdragon Fortissax. One of two things will happen when you wake up from your dream.

You can now go on your merry Tarnished way after collecting the Mending Rune of the Death-Prince, which is required to unlock one of Elden Ring’s endings. Reload the area if you gave D’s brother the armor, and you’ll find him standing over Fia’s dead body. You can get Fia’s armor and the Inseparable Greatsword by speaking with him and then reloading the location.

Reload the Area and Talk to Fia

Reload the region by fast traveling away and returning, and you’ll find Fia sleeping in the exact spot she was previously. To enter the Deathbed Dream, interact with her. Prepare yourself since this location is guarded by a fierce dragon boss.

Simply vanquish the boss inside the Deathbed Dream as your next stage. If you’re a melee character, you might find this to be a difficult task. The Lichdragon Fortissax is actually quite simple for ranged combatants. You’ll be automatically returned from the Deathbed Dream once you’ve defeated it.

When you return, you’ll notice that Fia appears to be in a coma of some sort. She is, without a doubt, continuing her Deathbed Dream. You can loot her for the Mending Rune of the Death-Prince, a key item that can change the game’s ending.

Reload the Region and Talk to D’s Brother

If you gave D’s brother the Twinned armor earlier, reload the area to find that he has slain Fia while she was sleeping and is gloating over her. D’s brother exacted vengeance for his brother’s death, seeing Fia’s work as a Deathbed Companion as an affront to his principles of hunting death and the undead.

Take back the Twinned Armour

If you took the path that led to Fia’s death at the hands of D’s brother, you now have the option of attacking and killing D’s brother or simply reloading the area. You’ll get the Twinned Armour back in either case, as well as a new weapon: the Inseparable Sword.

After the final boss, use the Mending Rune of the Death-Prince (optional)

If you obtained the Mending Rune of Death from Fia, you will have the option to use it at the very end of the game, after defeating the final boss, regardless of your previous choices. I won’t go into too much detail, but it gives you a slightly different variant of the main ending, which is neither the best nor the worst Elden Ring has to offer.