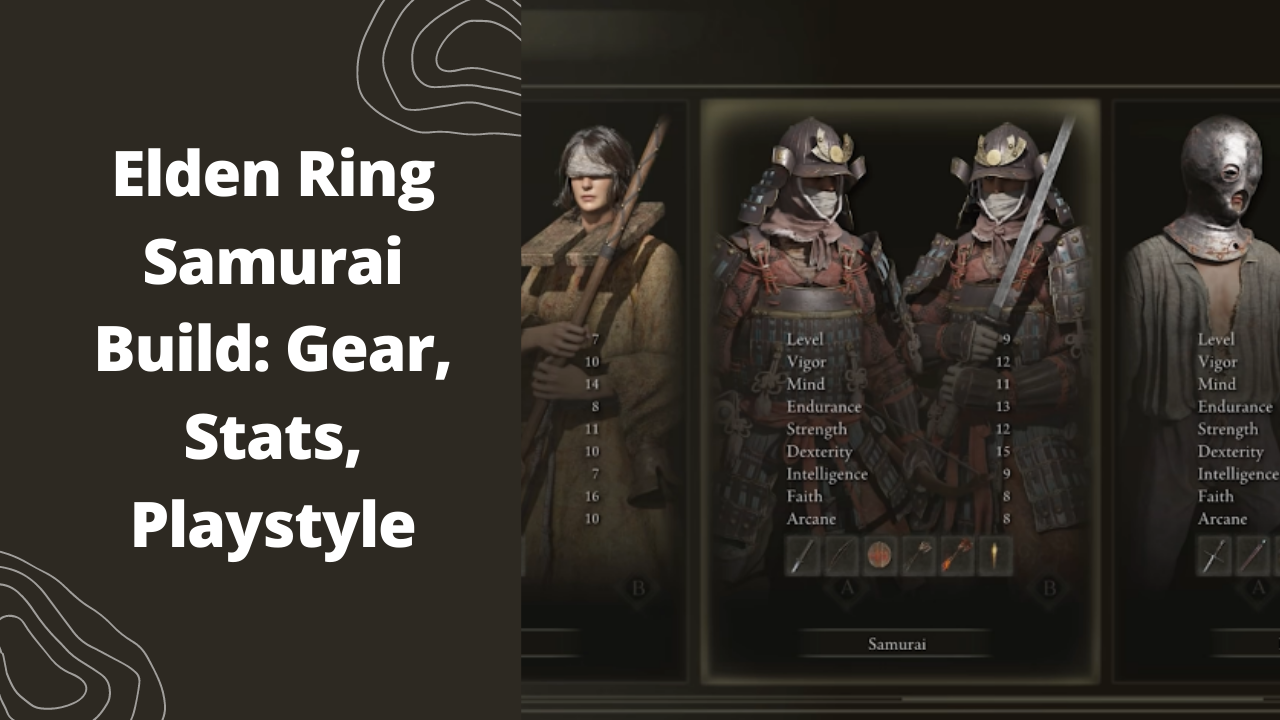 It makes no difference whether you’re new to the Soulsborne games or a seasoned veteran; the Elden Ring Samurai Build is a no-brainer. It’s a tried and true approach that has worked well in prior FromSoftware games, and it continues over into this current title as well, although with a few more unique features.

This Samurai Build will get you through a large portion of the game without ever feeling too weak or helpless, while also allowing you to scale your strength as you level up. Additionally, part of the beginning gear required for the build is automatically acquired by the Samurai starting class, so you won’t need to do any death runs to earn the necessary gear. While you’re here, be sure to check out our list of the Best Elden Ring Quests.

With everything out of the way, let’s get right into our Elden Ring Samurai Build.

To begin with, you should probably create a character with the Elden Ring Samurai class. is because the Samurai class begins with the Uchigatana as its primary melee weaponry, which is precisely the weapon we are seeking in this build. Additionally, it helps that your secondary weapon is the Longbow, which is an excellent early-game ranged weapon, and your starting armour is the really cool-looking Land of Reeds set.

You still have a chance if you did not begin as a Samurai but choose to transition to this construct. An Uchigatana may be found in the optional Deathtouched Catacombs to the north of Limgrave, and a Longbow can be bought from the Roundtable Hold’s Twin Maiden Husks NPC. For reference, here is the location of the game’s first Blacksmith.

Now, let’s get into the specifics of our Elden Ring Samurai Build gear, beginning with the greatest early melee weapon. Additionally, bear in mind that although this Best Samurai Build was created with beginning gear in mind, you may replace any of the gear listed below with a stronger but comparable option if you come across it. Please refer to our Elden Ring Remembrance Weapon List for further information about Elden Ring weapons.

Uchigatana has the passive effect “Blood Loss Build-up,” which grants opponents the Hemorrhage state. To summarise, bleeding damage compounds if players continue to use a weapon with the same ability, such as the Uchigatana.

Its Unsheathe talent is also excellent for dealing with both single and group adversaries; just press the skill button and conduct a light attack to perform a broad slash capable of striking numerous enemies. A powerful strike will execute an overhead assault that causes massive damage and also staggers the majority of adversaries in one hit.

Additionally, the Longbow is a competent long-range weapon that will suffice for the remainder of the game. Its dex scaling is compatible with our suggested Samurai stat pick, and it comes equipped with the Mighty Shot ability, which does significant damage without losing too many focus points.

Players may purchase regular arrows from Merchant Kalé in the Church of Elleh for 20 runes each bundle. As long as gamers have a sound method for rune farming, they should be alright. You may learn more about it here.

This is one area where players do not need to worry too much; just ensure that the armour set picked offers enough physical damage protection and is not too heavy. If users choose to wear heavy armour, this will have an effect on dodging, which is a critical component of a Samurai build. Investing in endurance, once again, allows players to carry more and compensates for any Medium armour sets. To summarise, the Land of Reeds armour set is awesome, and players should continue to use it.

The following are three Talismans that function very well with this Elden Ring best Samurai build:

This Talisman increases the range of ranged weapon shots, which works very well with the longbow. It will enable players to take down foes from a larger range than normal, compensating for the lack of armour protection.

The Axe Talisman boosts the strength of charged attacks, which means that pairing it with a powerful Unshethe skill attack is lethal. Not to mention the possibility of staggering.

This talisman is capable of regenerating health when players take critical strikes, which pairs nicely with the Uchigatana’s Unsheathe ability. Ideally, restoring health while addressing some significant injury is an ideal combo.

As previously stated, the samurai’s beginning melee weaponry scales quite well with either strength or dexterity. You can choose between the two at the start, but as the game progresses, you’ll want to make a decision and stick with it. A more fluid playstyle indicates that Dex should take precedence over Str, and I agree. Dexterity is just a better match for katanas and their quick slashes.

Both of your beginning weapons feature very strong talents that require FP to use successfully, particularly Uchigatana’s ‘Unsheathe’ ability. Therefore, try investing in the mind attribute to increase your FP metre, allowing you to use these Ashes of War more effectively. If you’re not interested in wasting points by placing them in your mind, you may always increase the number of uses on your flask of Cerulean Tears, but this reduces your healing supply.

You can get around this by putting a lot of points into Vigor to boost your hit points. Although this is a stat that is required for every build in the game, you want to have as much as possible for the Samurai build in particular. Because you’ll be a two-handed weapon for most of the game, you’ll want to have enough health to withstand any strikes. While improving your evading ability is always beneficial, having a large pool of health that can also handle the odd blow never hurts.

Your character will be quite frail throughout the first few hours of the game, and a few hits will quickly kill them. Therefore, while playing as an Elden Ring Samurai, you should use many of the methods detailed below.

To begin with, never charge into a fight headlong when confronted by a bunch of adversaries. Your health is not high enough that you can afford to absorb hits, so maintain your distance and use the Longbow to dispatch any stragglers in range. If the opponent is very weak, a single use of the “Mighty Shot” talent should be sufficient to eliminate them; otherwise, the damage done should be sufficient to knock them to their knees. At this moment, you may fire a second shot, which should kill them.

Alternatively, if the adversaries are not sufficiently weak to be killed with a single or two arrows, you may use the Longbow to distract them from their allies. In this manner, you may attack them one by one without being mobbed. And as they approach you, the Katana is drawn.

As your close-range melee weapon, the Uchigatana should be used against a single adversary at a time until you develop proficiency with it. Due to its relatively extended reach and destructive blows, it offers a great deal of versatility, and the emphasis should always be on staggering rapidly or inducing the haemorrhage state to deal a large amount of damage with strong timed hits.

You may wield the Uchigatana two-handed to get rapid access to the ‘Unsheathe’ talent, but this leaves you vulnerable to taking a lot of damage if you are struck. Shields are completely unnecessary for this Elden Ring Best Samurai Build since parrying is not a significant aspect of it. However, one approach is to use a shield without a related skill.

This causes the game to automatically use the Ash of War from the weapon in your other hand when you hit the Skill button. And in this case, it would be the ‘Unsheathe’ ability.