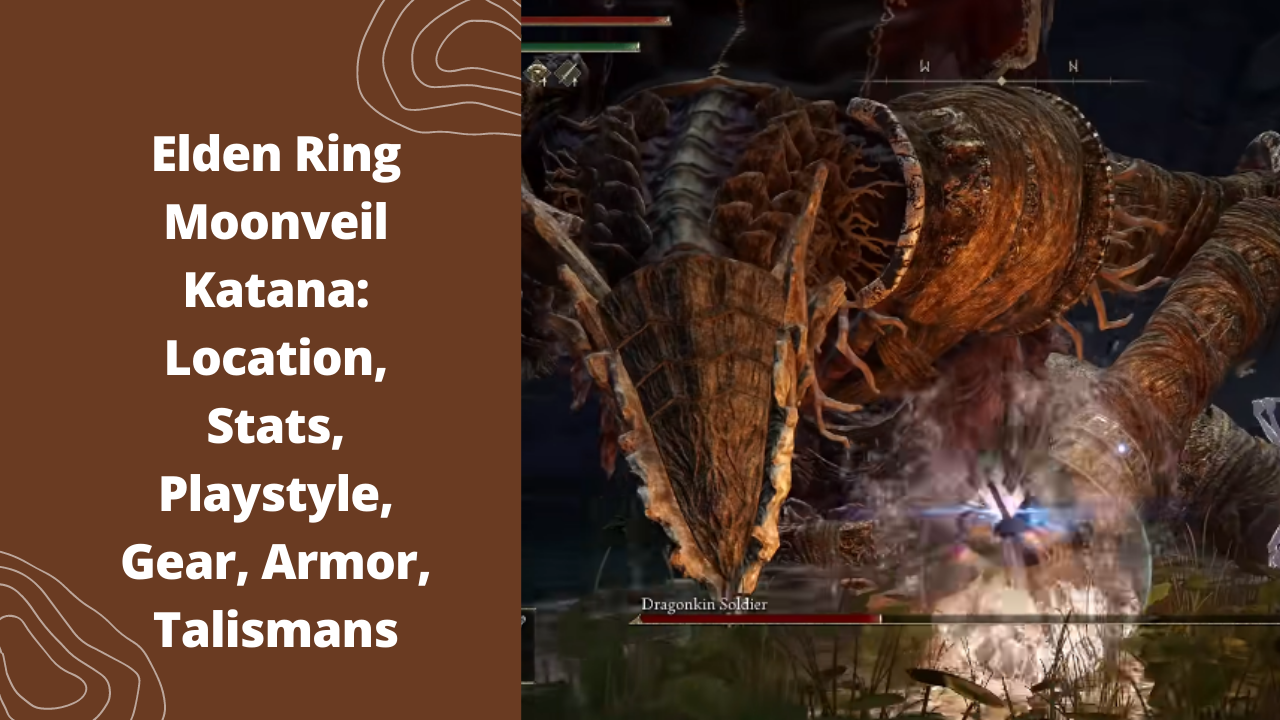 While Elden Ring is brimming with incredible weapons, few types of armament are as appealing as katanas. Fortunately, From Software has included some solid katanas for every build, and those invested in sorcery can take advantage of one of the game’s best options: Moonveil. This excellent pickup can quickly dispatch enemies and contribute significantly to the completion of an intelligence build, so you’ll be relieved to learn that it’s relatively easy to obtain—and we’ve got you covered on where to find it.

Moonveil is a katana with a magical component that requires 12 Strength, 18 Dexterity, and 23 Intelligence to wield. Due to its solid intelligence scaling, it is widely considered one of the best melee weapons for any sorcery build, and it also causes blood buildup for some additional damage output.

However, a large part of Moonveil’s appeal is due to its weapon skill, Transient Moonlight. The player sheathes the katana and then unleashes a horizontal wave of magical energy that deals some serious damage. However, because this requires a significant amount of FP, it is best used in moderation.

To locate the Moonveil katana, travel east of the Limgrave starting area into Caelid, the dead and reddish zone. You seek out Gael Tunnel, a small cave with a hole inside. From the Rotview Balcony Site of Grace, head south and down the cliff face to find this mineshaft. At the bottom, the Gael Tunnel Site of Grace awaits you. Just keep in mind that once inside, you’ll need to make your way to the tunnel exit before you can exit quickly.

Fortunately, you can run right past the majority of the enemies in the tunnel, collect the Rear Gael Tunnel Entrance Site, and exit without fighting the boss. Continue west and exit through the door west of the boss’s fog wall. While you’re here, you’ll definitely want to pick up the rear entrance to Site of Grace.

The boss you’ll face is the Magma Wyrm, who isn’t particularly difficult but can be a pain. This thing is massive, completely covers the ground with lava, and, to top it off, it’s located in a fairly small room with limited manoeuvrability. Stock up on fire-resistant consumables and stay as close to the beast’s feet as possible.

Congratulations on defeating the Magma Wyrm! Yours is the Moonveil katana. The following are the specifications for your new sword:

It scales damage primarily on the basis of intelligence, with a C ranking, and dexterity, with a D ranking. Additionally, the weapon skill “Transient Moonlight” is quite flashy. Your character will sheath the Moonveil and then reclaim it with a magical slash, either using the light or heavy attack button. Even if you are not locked onto an enemy, you can use your camera to aim for horizontal or vertical strikes.

If you’re looking for a way to incorporate the Moonveil into your character’s equipment. Additionally, you can check out our guides of Elden Ring

Given that this is an intelligence-focused build, it’s reasonable to assume that we’ll be utilising a significant amount of magic in our playstyle. After all, this is the stat that determines your ability to use the majority of the game’s Sorceries, and some of the best spells, such as the Comet Azur, require an extremely high point investment.

However, this perception is incorrect, as the Moonveil Katana Build is primarily focused on melee attacks that additionally deal magical damage. Consider this build as a close combat build with elements of magic. You can certainly incorporate spells into your playstyle if you wish, but that is an entirely different discussion. If you’re interested in learning more about incantation vs. sorcery, I recommend checking out our Incantation vs. Sorcery guide.

Meanwhile, let’s take a closer look at the equipment we recommend.

If you’re going to create an Elden Ring Moonveil Katana Build, you’ll want to play as a character who is quick on their feet and adept at dodging and fleeing when the situation warrants it. Because katanas are generally swift weapons, the armor set you choose should allow for swift movements as well.

Due to its lightweight, the Land of Reeds set that the Samurai class begins with is excellent early game armor. The Moonveil is also not a particularly heavy weapon, and when combined with the Moonveil, you can consistently maintain a medium load while maintaining the ability to roll out of enemy attacks. Additionally, you do not lose any stamina and can attack more frequently to inflict Hemorrhage.

Physical damage negation is adequate for such a light set, but the magical defense could certainly be improved. Again, you’re opting for lighter armor because the objective here is to dodge and remain mobile while attacking. The only disadvantage is that if you do get hit, it will be quite painful.

As you progress through the world and level up, a variety of new sets will become available to you that meet your requirements. My personal preference for my Elden Ring Moonveil Katana Build was the Raging Wolf Set, which has a higher negation of 29.3 physical damage but a lower negation of lightning and holy damage than the Land of Reeds set. This is obviously not optimal, but it provided me with a great deal of movement freedom due to the set’s lightweight.

I was able to enter the late game with a light load. This enabled me to execute faster dodge rolls and maintain a constant distance while evading most attacks. While this will obviously not work for everyone, it will work for those who are quick to react.

If a light armor set does not suit you, you can always upgrade to a heavier set and a 100% physical shield for protection. However, because enemies in this game hit hard, you’ll also need to farm a lot of runes and invest a lot of points in endurance to gain the stamina necessary to take the hits. And even then, dodging or jumping is sometimes unavoidable.

However, once again, the choice of armor is entirely up to you. Utilize the set that makes the most sense to you, regardless of whether it contradicts popular opinion.

The Elden Ring comes with a plethora of Talismans that can be used with a variety of different builds and playstyles. We’ve selected a few that we believe work best with the Moonveil as a weapon in this article.

The first is the Assassin’s Crimson Dagger. This is a Talisman that you can obtain very early in the game, and it never truly ceases to be useful. This item restores a small amount of health to you as you attack enemies and land critical hits on them. Thus, as long as you continue to land hits, you can potentially go for an extended period of time without using any of your recovery items.

This is advantageous when combined with the Moonveil, as its powerful special attack is capable of staggering the majority of enemies in three to four hits. And if you’re a skilled enough combatant, you can theoretically continue healing indefinitely. This is especially useful during boss fights, as it prevents you from using up your limited-use flask of Crimson Tears. Additionally, you should seriously consider expanding the number of uses for this item by locating all Golden Seed Locations.

As previously stated, the Elden Ring Moonveil Katana Build is primarily powered by your intelligence. And as the game progresses, leveling up becomes more difficult, and a single point in a particular stat can make all the difference when wielding a particular weapon or spell. This is why you require the Stargazer Heirloom, which instantly boosts your intelligence by five full points.

While 5 additional points is not a significant increase in the early game, it does provide a much-needed boost to your damage output. Additionally, if you believe that your rune investment could be better spent on other stats such as mind or vigor, you can use the Stargazer Heirloom to compensate for the points you intend to divert to other stats. In either case, it’s a win-win situation.

Finally, we arrive at the Horn of the Ancestral Spirit. This allows you to recover three FP whenever you kill an enemy in the game, with no additional requirements such as critical hits. When you defeat an adversary, you regain FP.

This is especially advantageous for the Moonveil Katana Build, as you will be using your special attacks frequently. Therefore, you want to ensure that you can replenish your FP meter without consuming a Flask of Cerulean Tears. You can afford to launch another Transient Moonlight projectile for every four or five grunts you kill in an area.

Mobility is critical when wielding the Mooveil Katana. Your character is not built to withstand a great deal of punishment, and as such, you must stay out of harm’s way for as long as possible.

You want to engage adversaries one-on-one as much as possible, approaching them only when you are certain they are isolated and without allies. Once within striking distance, deliver a series of slashes in rapid succession to maximize the Hemorrhage meter, then retreat to safety. Rep this as soon as possible to prevent the bleed meter from depleting and, hopefully, the status effect will occur, wiping out a large portion of the foe’s health.

When confronted by a formidable opponent, such as a giant who strikes hard, do not attempt to parry or block the blow. You are not built to take a hit, and your best course of action is to dodge roll out of range of the attack. You strike during the brief window of opportunity when the adversary is preparing to attack again.

Additionally, do not overlook the Moonveil Katana’s Transient Moonlight ability. The light attack is excellent for crowd control and enables you to easily clear your path if you ever find yourself in a tight spot. While the damage is not as high as with heavy attacks, the projectile is capable of striking targets that are otherwise inaccessible from the ground.

On the other hand, the heavy transient moonlight attack is an absolute beast that will allow you to instantly destroy bosses. This is because the attack is composed of two distinct components: a ranged projectile and a downward melee slash.