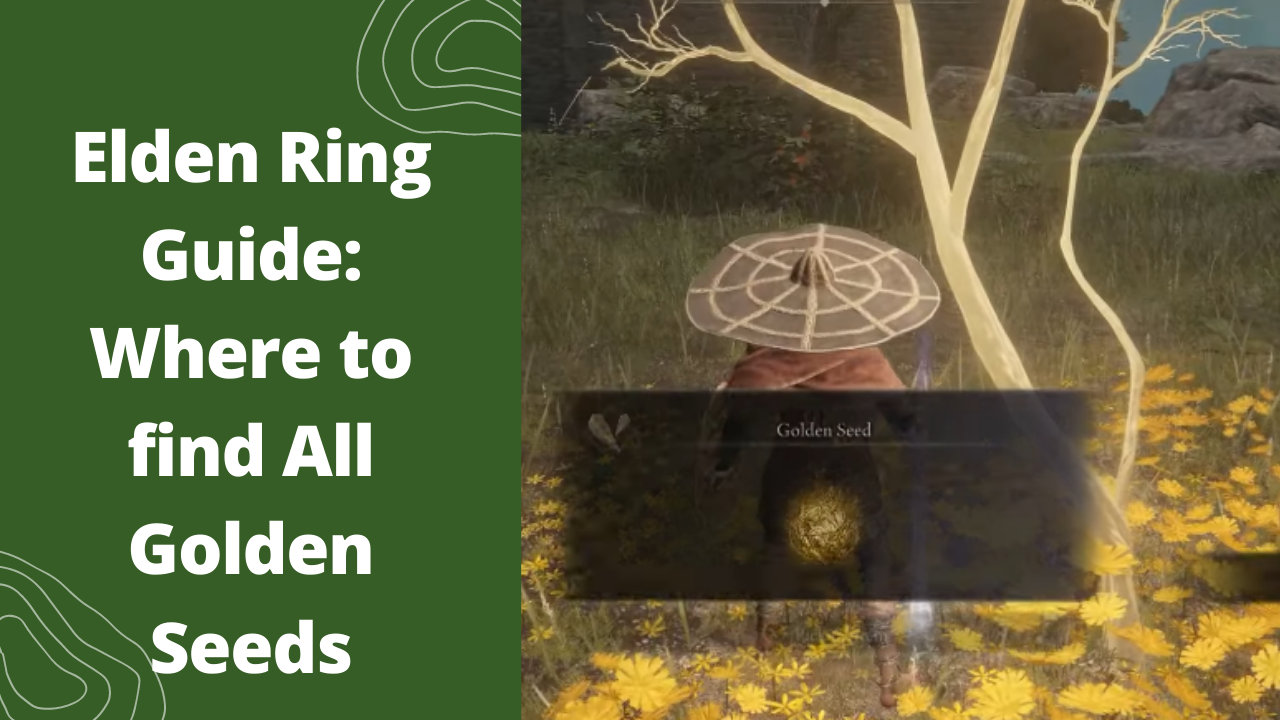 Knowing where to look for Elden Ring Golden Seeds can have a big impact because it allows you to heal faster. As monster fights become more difficult and damage increases, being able to replenish your health more frequently will allow you to survive longer. With Golden Seeds in Elden Ring, you can improve your Sacred Flask by giving it more uses, but their location can be unpredictable.

They can be found near the base of small golden trees, but finding them is the problem. While they arrive on a regular basis along the game’s main road, it’s not always clear what that path is-spend hours exploring detours and side routes, and it could be a long time before you find more. So, if you’re looking for Elden Ring Golden Seeds and more of them, we’ve got everything you need to get started, including a map.

What are Golden Seeds, and how do you get them?

Golden Seeds from the Elden Ring are a sort of consumable item encountered throughout the game. They can be found at the bases of miniature golden tree saplings that resemble Erdtrees. You should go to the nearest Site of Grace after collecting one or more Golden Seeds, rest, and select the “Flasks” option from the menu. Use any of your Golden Seeds to give yourself more swigs of your Sacred Flask by selecting the “Add charge to flask option”.

You’ll require more and more Golden Seeds for every few more flask uses you acquire, so not all Sacred Flask upgrades are made equal. At first, one Elden Ring Golden Seed will always grant you one extra use of your Sacred Flask, but you’ll eventually require numerous seeds for each additional flask use:

Keep in mind that the Sacred Flask in Elden Ring has both health-restoring and magic-restoring powers, so you might want to split your flask usage between healing Crimson and magic-restoring Cerulean if you receive more. Also, Elden Ring Golden Seeds do not strengthen your flasks, so you’ll need to locate Sacred Tears to boost their restorative abilities. You should also look into Elden Ring Rune farming spots so that you can put more points into your Vigor or Mind Attributes to increase your HP and FP.

While you can locate a couple of Golden Seeds in the first few hours, you can also start with a Golden Seed when establishing your character as one of the Elden Ring Keepsakes. Picking it up will give you a leg up on the first few bosses, and you might have as many as seven Sacred Flasks used by the end of the game.

In the West Limgrave region, you will find five (or six) Golden Seeds. The first is offered as a souvenir during character creation and will not be included on the map. The others can be found in or around the Fringefolk Hero’s Cave (1), Stormgate (2), Fort Haight (3), and Stormveil Castle’s Secluded Cell (4) and Liftside Chamber (5).

This first Golden Seed you might come across requires a lot of effort to grasp – in fact, it’s far too difficult to tackle for an extended period of time. To get into the Fringefolk Hero’s Cave, you’ll need to use two Stonesword Keys (which you can keep or find in the world), navigate the poison and traps, and defeat the dungeon’s boss, the Ulcerated Tree Spirit. For conquering it, you’ll receive a Golden Seed.

Location of the Srormgate golden Seed

You’ll pass through Stormgate on your way northwest from the Gatefront Ruins to Stormveil Castle. After you’ve gotten rid of the demi-humans and the troll, you can continue up the hill. Look to the right as the road curves to the right for a glowing tree. Its foundation will be this Golden Seed.

Location of the Golden Seed in fort Haight

In East Limgrave, Fort Haight is located along the shore to the east-southeast. This Golden Seed can be found outside the walls, to the south, near a glowing tree.

The Secluded Cell is a location of grace deep within Stormveil Castle, immediately before you face the area’s boss, Godrick the Grafted. To find this Golden Seed, look to the south for another glowing tree.

There’s a difficult-to-reach underground location deep beneath Stormveil Castle; to go there, you’ll need to unlock the entrance beside the Liftside Chamber site of grace. To get this Golden Seed, defeat the lessor ulcerated tree spirit you’ll find there.

In the Weeping Peninsula, there is only one Golden Seed. It can be found northeast of Castle Morne.

A low stone wall runs (approximately) east-to-west about halfway between the Castle Morne Lift and Rampart Places of Grace. Look for remains south of the plateau where the wall stands. Another glowing tree with a Golden Seed at its base can be found just south of the ruins (it’s a little southwest of the Weeping Plateau map fragment stele).

The Golden Seed Location of the Main Academy Gate

Follow the bridge northeast from the Main Academy Gate site of grace to find this Golden Seed under a bright tree at the end.

Location of the Ra Ya Lucaria Golden Seed Academy

Begin in the site of grace, the Debate Parlor, deep within the Academy of Raya Lucaria (which unlocks after you defeat the Red Wolf of Radagon). Continue north into the open courtyard, staying to the left (west) until you reach the bridge. On the cliff’s edge, you’ll find this bright tree and Golden Seed.

Continue to the Manor Upper-Level place of grace inside Caria Manor in Liurnia’s northwest corner. To the west-northwest, this Golden Seed can be found.

All Golden Seed Locations in the Atlus Plateau

From the Dectus Elevator, proceed down the road and turn left at the fork. A golden sapling can be seen a little further up, on the left side.

In the woodland to the north of the Erdtree symbol. A golden sapling may be found on the left side of the road heading north out of the woodland towards the Windmill Pastures.

A sapling to the right of the river can be found north of the Seethewater River Site of Grace, past the volcanic vents.

Head west across the rocky outcrop and jump to the gap after defeating the Full-Grown Falling Star Beast boss above the Ninth Mt. Gelmir Camp Site Grace. Return your gaze to the Troll’s body, where you’ll notice a golden sapling. Additionally , you can checkout our Elden Ring map guide, to know more about Mt. Gelmir.

You’ll locate a golden sapling with two Golden Seeds just beside the Outer Wall Phantom Tree Site of Grace, past the stairwell going into the city with the two Tree Sentinels boss.

You’ll come to a square with a golden sapling and two seeds if you head up the steps from the Outer Wall Phantom Tree Site of Grace, past the big gargoyle.

A golden sapling may be found on the right side of the road as you travel east from the Forbidden Lands Site of Grace. Keep an eye out for the fast-moving foes.

Head north-east up the river from the Ancient Snow Valley Ruins site of grace until you see the Ruin Golem patrolling side-to-side. There will be a golden sapling on the right side.