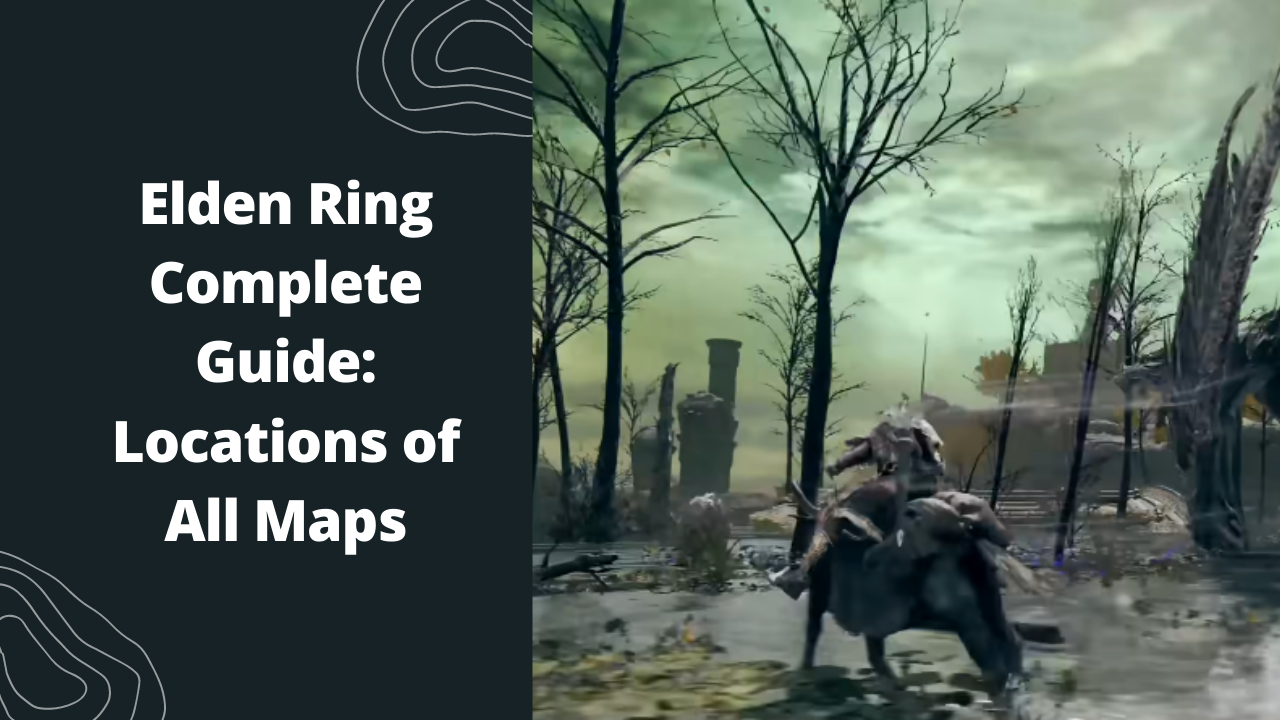 However, things are a little different with Elden Ring. Although the Souls games were open-ended in some areas, Elden Ring gives the players a truly massive open world, necessitating the use of a map. That map, however, isn’t just handed to you; you’ll need to hunt out specific map places in the form of pillars, which are marked on the map, slowly unravelling pockets of The Lands Between for you to enjoy.

So, you wish to see the Lands Between’s rich and detailed topography? Continue reading for a list of Elden Ring Map Locations. We’ll keep this guide up-to-date as we discover more.

However, things are a little different with Elden Ring. Although the Souls games were open-ended in some areas, Elden Ring gives the players a truly massive open world, necessitating the use of a map. That map, however, isn’t just handed to you; you’ll need to hunt out specific map places in the form of pillars, which are marked on the map, slowly unraveling pockets of The Lands Between for you to enjoy.

So, you wish to see the Lands Between’s rich and detailed topography? Continue reading for a list of Elden Ring Map Locations. We’ll keep this guide up-to-date as we discover more.

Take it from the body near the Pillar in the Gatehouse Ruins camp’s center.

The pillar may be found on the left side of the road as you travel south through the Mistwood, near the gigantic Erdtree.

South of East Limgrave, cross the Bridge of Sacrifice and continue on the route south. Before seeing a castle in the distance, you’ll pass a broken carriage, a troll, some hounds, and a teardrop scarab. The map pillar should be on the right side of the road in front of you. However, keep an eye out for the Ruin Golem archer.

Head east down the road from the Rotview Balcony Site of Grace. Before turning eastwards again, you’ll pass a wrecked caravan before heading south past the Caelem Ruins, the Smoldering Wall Site of Grace, and lastly, the Caelid Waypoint ruins on the right. Continue beyond the sleeping dragon to a fork in the road, where you’ll find the map pillar.

Travel east along the road past the damaged caravan and the huge dogs from the Rotview Balcony Site of Grace in East Limgrave. Continue east, passing more dogs on the right, and cross the ravine at its narrowest point. Continue on to the Dragonbarrow West Site of Grace, and the map pillar is located along the eastern road. There are also some very large dragons.

Follow the road west from the Lake-Facing Cliffs Site of Grace, past the soldier camp, until you reach the Liurnia Lake Shore Site of Grace. Follow the flooded road, which is indicated by walls and lanterns, to the pillar on the right, which is surrounded by opponents.

Grace’s Academy Gate Town Site was discovered. From the Liurnia Lake Shore Site of Grace, head northwest until you see the submerged academy entrance town on your right. It’s a lengthy journey with many enemies. You’ve gone too far west if you see three huge lobster creatures around a statue or the Fallen Ruins of the Lake Site of Grace, so head northeast to discover the village.

Follow the road that runs the length of West Liurnia to the north. You’ll pass the military camp and the convoy, as well as the four belfries on the hill. Just beyond the Northern Liurnia Lake Shore Site of Grace, you’ll see the map pillar to the left of the road.

Once you’ve obtained both pieces of the Dectus Medallion and activated the Grand Lift of Dectus in north Liuria, proceed to the Altus Plateau via the road heading there. Continue straight at the split in the road until you see the map pillar on the left side.

This area is one of the most difficult in the game to explore, especially because the major route leading west from the Bridge of Iniquity to the Site of Grace comes to a halt halfway across a broken bridge. To get to the map pillar, you’ll have to travel across the mountains.

Look for a ladder on the left side of the road as you travel west. Follow it up to the army camp with the siege tower, which is further west. You’ll find a pumpkin head with a rocky outcropping behind it, where you can jump to the next cliff at the far end. Climb the next ladder on the rock face ahead of you, keeping an eye out for the grafted scion that will fall from the sky.

Continue rising, keeping an eye out for marionette foes, until you reach the military camp at the summit. Cross the wooden rope bridge on the left as you pass through the camp. Jump to the boss crater using the Spirit Spring, then veer westwards onto the rocky outcrop and jump the gap. Continue descending until you reach the map pillar and the Road of Iniquity Site of Grace, but beware of the gigantic hand monster.

After climbing the stairwell inside the city and past the two Tree Sentinels, look to the side for a Site of Grace, a golden sapling, and a map pillar.

Continue forward, up the lift, past the enormous crab, until you reach the Siofra River Bank Site of Grace, which is located in the Mist Wood and allows you to descend underground. Head east, beyond the pillar, to see a body slumped near the temple stairs where the stag’s body was found. The map is in this body.

The Palace’s perspective Approaches Grace and sprints down the right-hand hill. Continue straight until you reach the water, and then sprint along the left side. You’ll come across some ruins and a shattered statue as a result of this. If you climb those steps, you’ll find a dead body holding the map.

Head down the tunnel from the Ainsel River Main Grace, past the coffins, and into an open cavern with statues. Continue along the right path until you’re just shy of the next grace (which you should touch first), then go straight through the door and into the elevator. Run forward into the building after exiting the elevator to another large open cavern. You must avoid a difficult enemy here, but your goal is to get underneath it via the path on the right. Enter the room once you’re beneath the enemy, and the map sits on a slumped-over body next to a merchant.

The map fragment for this is located south of the Lake of Rot Shoreside Grace on a dead body.

East Mountaintops of the Giants

To find the pillar, walk south through the fort and across the chain bridge from the Whiteridge Road site of grace.

West Mountaintops of the Giants

Head a bit further along the track from where the Grand Lift of Rold comes up, and you’ll find the map pillar on the right side of the track.

When you complete the rather obscure steps to reach here in the first place, this map appears to be unveiled.

It’s simple: this is the same map segment as the West Mountaintops of the Giants (above).