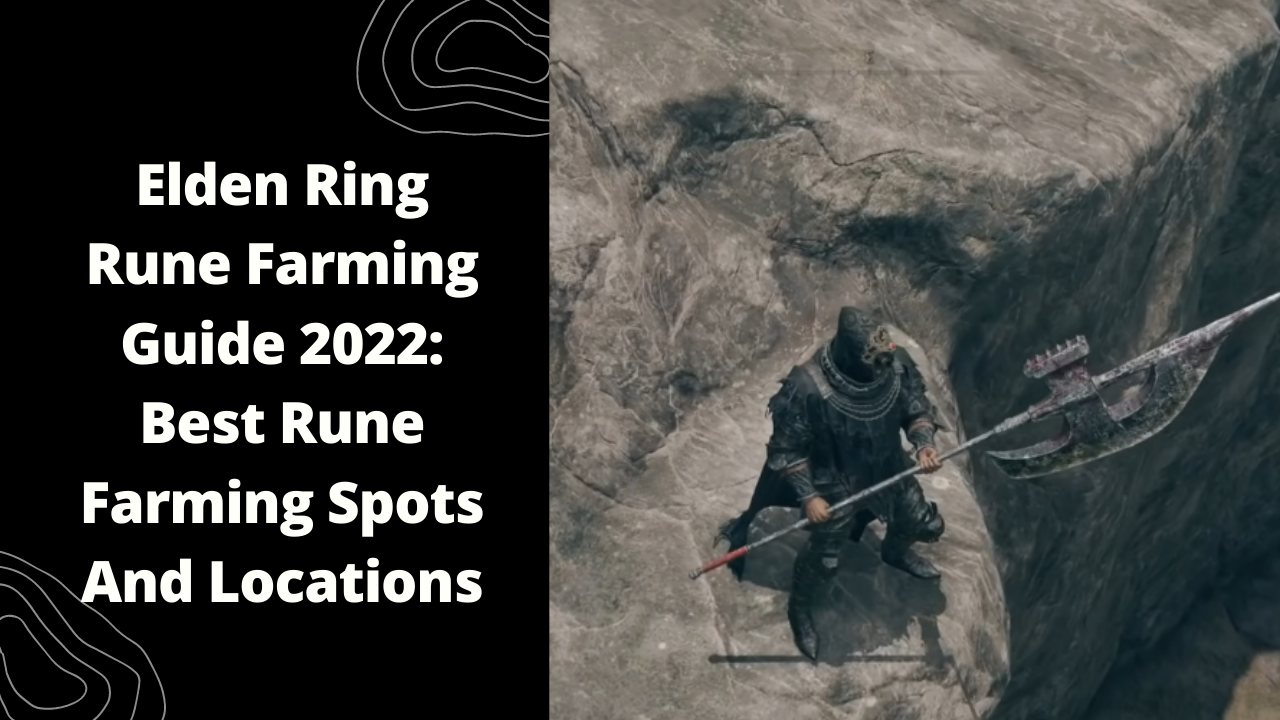 Elden Ring is a game about facing difficult obstacles and overcoming adversity, but it’s also about filling your pockets with valuable runes and satisfying your desire to watch numbers grow.

You’ll be short on leveling up for most of the early game—which, remember, will take a long time in this enormous open world. You’ll breeze through the first few levels, but the rune cost climbs with each passing level, and the manageable monsters you’ve been dining on will soon be insufficient.

Thankfully, you don’t have to follow the rules as you explore the world and fight your way through its dungeons, slowly gathering runes. There are numerous locations in the Lands Between where you can quickly amass a mountain of runes by utilizing certain abilities, enemy patterns, or geography. Welcome to the life of a rune farmer in Elden Ring.

Limgrave, the first region in Elden Ring, contains a number of Rune farming locations that will greatly assist inexperienced players wanting to develop a powerful build. Players should make sure they have plenty of Gold-Pickled Fowl Feet in their inventory before heading out, as these consumables grant a 30% boost to Rune acquisition for about three minutes.

The Gate front in West Limgrave is one of the top early-game Rune farming areas. Within a few minutes, the player should be able to eliminate all of the foot soldiers stationed there, as well as their dogs. This should provide the player with roughly 1,300 Runes, which should get them a few levels after a few attempts at this point in the game. If the player is still unsure, they can pick up the Spirit Calling Bell at the Church of Elleh and use some Spirit Ashes to aid in aggro against the group of monsters.

A more dangerous and more lucrative agricultural area in Limgrave is just south of the Warmaster’s Shack, on the hill with all the Elden Ring trolls. Killing one of these trolls pays you 1,000 Runes, killing all five trolls on the ridge should net you around 5,000 Runes per run. New players should stay away from this, as the trolls have a lot of power. Using magic can make it much easier to defeat these foes.

You’ll most likely have a large number of runes once you’ve defeated Stormveil Castle, the first Legacy dungeon. But can you ever have too much of a good thing? Fortunately, there’s a farm just up the road.

The Site of Grace can be found near the Liurnia Highway North (beyond Stormveil Castle), and you don’t need to do much here because you can gain runes while AFK.

A group of soldiers is fighting spiritual attackers and one gigantic right close to the checkpoint (which you need to run over with your horse to trigger). The giant will rapidly annihilate the majority of the soldiers, awarding you around 43 runes for each kill. It’s not much, but it could be beneficial if you want to do anything idly while watching Netflix. You should go if you’re in the region.

Raya Lucaria Academy is the next legacy dungeon you’ll come across, and farming its monsters might net you a hefty haul if you have a strong build and a desire to help your fellow Tarnished. With the help of PCG contributor Samantha Greer and her enormous sword, our features producer, Nat, employed this method.

Nat explains that the Academy’s biggest enemy, Rennala, is very easy to stagger, which means strong people can toss her around like a rag doll. If that’s your build, you should have an easier time with her. Therefore, you should volunteer to help other players while still collecting runes.

“Samantha spent the remainder of the night after our victory laying down summon signs for other players, raking in a good 10,000 souls per run. Not bad for 5-minute combat with a witch who is unable to defend herself due to being thrown around like pancake batter. “

Caelid is possibly the best location for Rune farming, with numerous spots that should yield over 10,000 Runes every 10 to 15 minutes if the player is ready to take on some tough adversaries. Players should first locate the abandoned cave in Caelid’s Dragonbarrow location and beat the boss to obtain a Golden Scarab Talisman, which boosts Rune acquisition by around 20% and stacks with the Gold-Pickled Fowl Foot.

Players should use the portal situated to the north of the Third Church of Marika to get to Caelid fast. Players will emerge from the Bestial Sanctum, where they can ride Torrent past the enormous boss at the bottom of the steps to the nearest Site of Grace. Players can then take out each imp enemy one by one. Every run, the player should gain roughly 7,000 Runes.

Caelid’s War-Dead Catacombs have some of the best farming sites in the entire game. This dungeon is more of a late-game farming spot because it can only be entered after fighting Radahn. Players will see two groups of phantom monsters chopping away at each other inside the dungeon. These spirits are quite powerful, but players can hide in the room just before the boss fog and wait for the Runes to arrive. These foes drop roughly 2,000 Runes each and spawn indefinitely, so it may take some time.

The best farming place so far will require you to go below and into a really difficult area, but don’t worry—it’s simple. TagBackTV stumbled upon this hidden gem, and you can see how they did it in the video below.

It takes some effort to get to this rural location. Varre’s task requires you to visit him in Liurnia’s Rose Church, invade three other players, soak a rag in the blood of a corpse found northeast of the East Raya Lucaria Gate, and then return the rag to him. You’ll receive some prizes right away, but you’ll need to chat with him again to collect all you’ll need for this farming run. Varre will advise you to wait but disregard him. It’s the Pureblood Knight’s Medal. It’s ready to use right away.

The metal will convey you beneath, and a map and the Grand Mausoleum Entrance site of Grace are just up the steps. After that, you’ll want to spin around and leap down so you can ride Torrent. And you’ll need it because this place has a few nasty surprises you’ll want to avoid. You should be alright as long as you keep moving and move around the perimeter of the place.

You’ll eventually reach the top of a hill, where you’ll locate the Palace Approach Ledge-Road place of grace. Rest here to re-energize all of the adversaries who are unquestionably pursuing you. You’ve completed the task! The next step is simple: glance over the edge of the cliff at the land below you. Isn’t that an ominous-looking bird scurrying around? Shoot it with an arrow (or a bolt if you’re using a crossbow) and watch it jump to its death in an attempt to reach you. It’s a good thing it’s a flightless bird. You’ll get 13,245 runes as a reward for your efforts.

Depending on variables like the Gold Scarab and how many times you don’t nail it on the first shot, TagBackTV believes that you’ll collect 3–4 million runes each hour. Because the bird is so far away, you must time it perfectly, and sometimes it may fly right up to the edge and then stop, rather than fall. Even so, it’s a really easy and quick way to earn a large number of runes.

With the exception of this underground farming location, most of the above may be done as soon as you have Torrent to move you around swiftly and provide you with a massive number of runes right away. It should be much easier to pass through Stormveil and fight its lords now.

The Altus Plateau offers multiple rune farming locations that are great for mid-game players. The Windmill Village, located on the northern peak of the Altus Plateau, is one of the nicest places to visit. If the player is swift enough and has a well-leveled weapon, the dancing villagers should be dispatched within 90 seconds, netting them roughly 3,500 Runes every minute and a half.

If players want a more difficult challenge, the caravan near the Iniquity Side Path Site of Grace is a suitable choice. There are trolls, footsoldiers, and a Pumpkin Head opponent in this caravan. It’s a difficult fight, but it should pay off with roughly 20,000 Runes per run.

Locations for Rune Farming in the Giants’ Mountaintops

The Mountaintops of the Giants, as one of the last regions in Elden Ring, feature some of the most lucrative farming spots, but each one comes with a considerable obstacle. The Zamor Ruins are the easiest and fastest Rune farming location in this region. If they are skillful enough, they can easily take out the lone adversary just a few meters away from the Site of Grace. If the player is quick enough, they can get around 5,000 Runes in under a minute.

This location contains Haligtree, one of the most difficult areas in the game. This region is one of the most lucrative Rune farming spots in the game, with normal foes dropping a few thousand Runes apiece. It’s a little tough to get to, requiring Elden Ring gamers to uncover certain hidden goods. The balcony directly past the Prayer Room Site of Grace, in particular, should yield roughly 18,000 Runes per run.