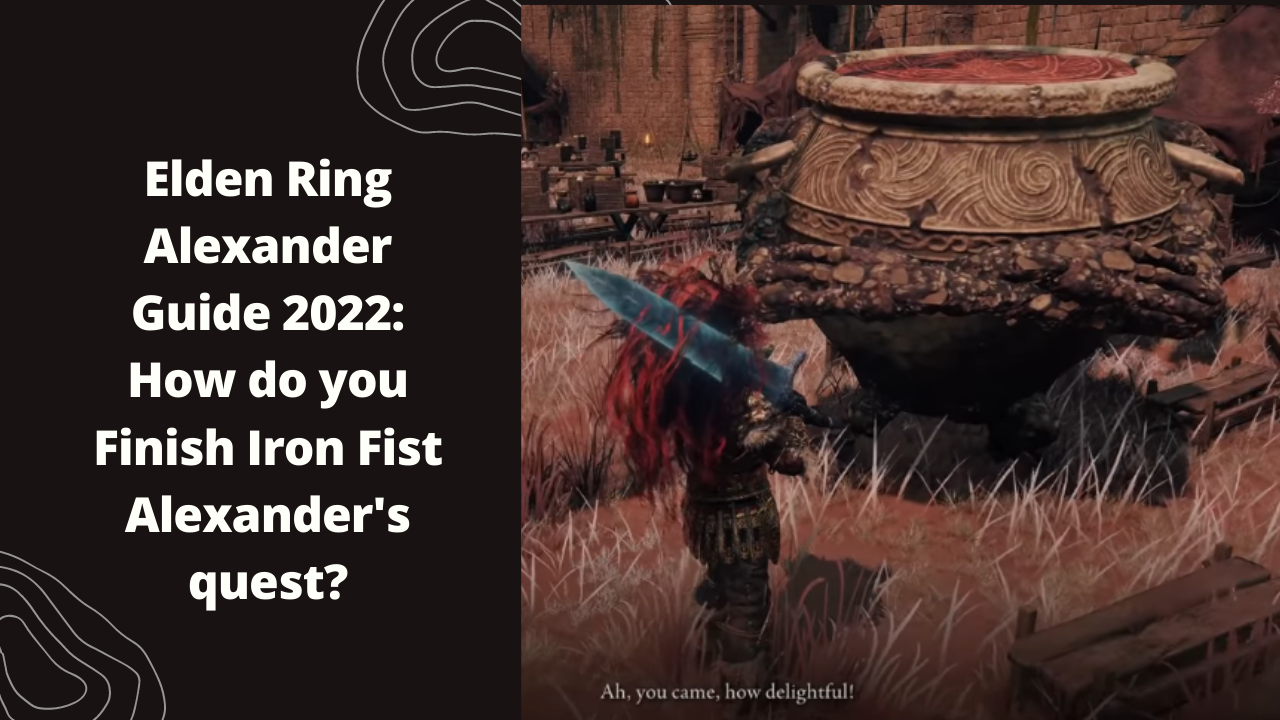 Iron Fist, a superhero who fights crime, Since his public revelation before Elden Ring’s network test late last year, Alexander has managed to become quite a breakthrough figure. He mixes a fresh (but iconic) shape with the jovial, courageous temperament of a Catarina knight. This is what peak performance looks like, lads.

Iron Fist Alexander’s journey is long and winding, with interactions at nearly every turn along the way.

The Iron Fist Alexander quest in Elden Ring is fairly lengthy and requires you to visit a variety of locations. This quest can be begun within the first hour of the game, but you won’t be able to visit any of the essential locations to meet the pot boy until later on. Here’s a map of where you’ll need to meet Alexander in order to continue his mission. Below there is a step-by-step analysis of each stage of the quest, as well as what you must do, which is usually only to exhaust Alexander’s speech.

Alexander initially appears in Stormhill, which is located to the east of Stormveil Castle. When you get close enough, you’ll hear him crying for aid in a ditch near an enemy encampment and a site of grace at the end of a bridge with a pumpkin head on it.

Iron Fist Alexander will request that you use a hefty weapon to knock him out.

I switched to a greatsword I didn’t have the strength to use properly and knocked him out with two hits (though you may knock him out with any weapon). Listen to Alexander’s entire conversation on who he is and the Radahn Festival, and then follow him to his next place after resting at a site of grace.

The Gael Tunnel, located early in Caelid, is the next destination on the Pot Boy World Tour. It’s also where you’ll find the fantastic Moonveil Katana, one of Elden Ring’s best weapons. There is a back entrance to the tunnel in Limgrave that will allow you to speak with Alexander, but you’ll want to enter from the main entrance in Caelid, clear the dungeon, and open the locked door that Alexander is standing near from the other side to complete the dungeon and hear everything he has to say.

Alexander will go to the Radahn Festival if his discourse is exhausted here.

During the Radahn Festival, Iron Fist Alexander will be one of several NPCs gathered in the courtyard of Redmane Castle.

It’s been mentioned by some players that you can bypass Alexander’s first two encounters and still locate him here, where he’ll have alternate dialogue introducing himself for the first time. I’m unable to confirm this at this moment, but if you’re interested in learning more about Alexander’s journey, make sure to visit his first two sites before confronting the Starscourge.

Alexander will be summonable during the Starscourge Radahn boss battle, although it does not appear that calling him is essential to completing his objective. In previous FromSoftware games, particularly Dark Souls 2, there were strict prerequisites for calling NPCs in order to witness their whole quests. I was able to complete Nepheli Loux’s questline without summoning her to Godrick, and I only summoned Alexander on my first attempt against Radahn—he was not present when I completed the boss’s last run.

You can locate Alexander nearby after beating Radahn and resting at his Site of Grace. If you finish his dialogue, he’ll go on to the next place.

The next time Alexander gets stuck, he’ll need some lube. Unfortunately, the only way I know of to get the oil pot item he needs is to use the Nomadic Warrior’s Cookbook [17], which can be bought from the Nomadic Merchant in the Siofra River underground zone.

Go north from the Siofra River Bank Site of Grace, avoiding the opponents along the route. Thanks to some scaffolding, you can climb the second set of gigantic pillars on your way. Get to the top and follow the scaffolding west into the cliff face until you reach a location where you may drop down and speak with the merchant.

The cookbook costs 1,000 runes, and the pots require one cracked pot and one melted mushroom each to make.

In Liurnia, Alexander and Jarburg

Next, Alexander can be located in east-central Liurnia of the Lakes, close to the Artist’s Shack Site of Grace and the Liurnia Divine Tower.

He’s returned to get a better look at his hometown of Jarburg (which is also vital to his questline), and his girthy form has become trapped in the ground once more. Grease him up with one of the oil pots you made, then whack him with charged power attacks from a heavy weapon once more. This battle was a bit problematic for me—I had to use a number of oil pots and switch weapons to get him out—but this combo will ultimately jar him loose.

After exhausting his dialogue once more, it’s a good idea to return to Jarburg to speak with the new Jar Bairn who was added in the 1.03 patch. They play an important role in the closing phases of Alexander’s quest, providing context for his travels as well as in the Dialos Hoslow NPC questline.

Jarburg is right over the cliff from where Alexander was stranded, and just south of the Divine Tower are some tombstone platforms to climb down.

Alexander has traveled to Mt. Gelmir in the north to “strengthen himself.” He’s a little more literal than you may think: he wants the volcano’s heat to bake his clay exterior even harder!

Alexander is located southwest of the Grace Terminus Site of Seethewater. This zone is reached by following the canyon from the Seethewater River Site of Grace in the western Altus Plateau, which might be a little confusing on maps. The Volcano Manor Legacy Dungeon does not have access to it.

Follow the path across the canyon and around Mt. Gelmir to the north. Just before the Primal Sorcerer, Azur Site of Grace, you’ll have to face another Demihuman Queen (while you’re here, pick up the powerful Comet Azur sorcery for Sellen’s Questline).

You’ll have to fight a Magma Wyrm boss between the Seethewater Terminus and Alexander’s location. It has the same moveset as the one you battled in the Gael Tunnel, but it has been scaled up for this stage of the game, so keep that in mind when fighting it.

Walking on the magma will simply slow you down and do little harm. Torrent can run at full speed and yet take damage. You can talk to Alexander and collect his present, a snazzy and lovingly-crafted helmet, from a big island in the lava near his location. Even after you’ve exhausted Alexander’s talk, he’ll stay here until a certain trigger is met—possibly slaying the Fire Giant, but it may be sooner.

The Fight of the Fire Giant Boss

For this late-game Elden Ring boss, Alexander will be summonable once more. Again, it doesn’t appear like you need to summon Alexander here to help him with his goal. He is not available for conversation anywhere in the Mountaintops, and you will have to wait until one of the game’s final stages to speak with him.

In the Crumbling Farum Azula Legacy Dungeon, Alexander will appear in the above-mentioned place. The story comes to a sad conclusion with Alexander seeking a death duel, as is customary in the Souls series. When compared to ordinary Living Jars, he has a lot of mixups. However, once you defeat him, you can face him again.

After you’ve defeated him, speak with him one last time, and you’ll notice that he’s left you a Warrior Jar Shard, a powerful talisman that boosts Ashes of War and Alexander’s Innards.

You only have one stop left in the quest as of the 1.03 release.

Also Read: How To Get Hoarfrost Stomp Ash Of War: Elden Ring

You may need to finish Jar Bairn’s dialogue immediately before handing over Alexander’s innards if you haven’t already. You’ll get the Companion Jar talisman in exchange. Raising the potency of throwing pots isn’t the best effect of all the Elden Ring Talismans, but how could you ever un-equip it after you’ve had it? Additionally, you can check out our legendary Talismans Elden Ring Guide.