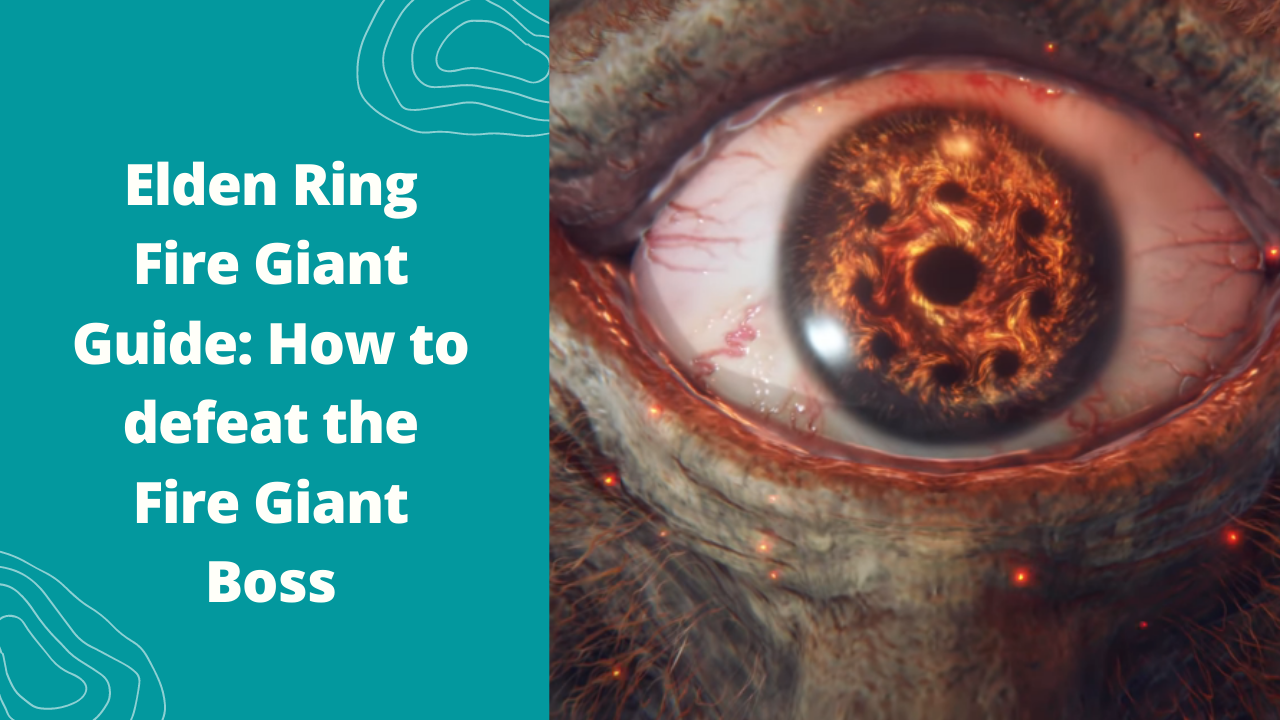 To move on in Elden Ring’s story, you need to defeat the Fire Giant, which is a must-kill boss.

In Elden Ring, the massive Fire Giant monster may be found in the eastern area of the Mountaintops of the Giants location.

The fight against the Fire Giant can be a difficult one, so we recommend using some teamwork or even a spirit ash call to aid you in your quest to defeat the boss.

How to Get Ready for the Fire Giant

The procedure for preparing for the Fire Giant boss fight is rather straightforward. To begin with, make sure you’ve taken every conceivable precaution against fire damage, such as donning the Flamedrake Talisman in your Talisman slots.

You’ll also want to make sure you have a powerful melee weapon on hand, like the Bloodhound’s Fang, which is fantastic for massive swings and long-term damage.

In Elden Ring, when should you face the Fire Giant?

The Fire Giant cannot be defeated unless the Mountaintops of the Giants portion of Elden Ring has been unlocked, which you can do after killing Morgott, the Omen King.

The Fire Giant, unlike him, is not a Shardbearer. He’s also a boss that you can’t avoid. Given how difficult the Mountaintops of the Giants zone is in general, you should devote some time to exploring it and improving your weapon and overall level in order to have a greater chance of defeating the Fire Giant.

We recommend entering the battle with a level 110-115 character and a weapon with an upgrade level of +18/+19.

Fire Giant can be seen exploring the frozen tundra in the location of the Mountaintop of the Giants. There’s no avoiding him because he’s a necessary boss. Whether you want to fight fairly or cheat in the encounter will determine how you approach him during both phases.

Believe it or not, the first phase is the most difficult of the two. As soon as you pass through the mist gate, mount your horse and dismount only when you reach him. Otherwise, you should avoid staying on horseback during this moment.

One assault you’ll have to watch out for as you make your way to him is one in which he sticks his saucer into the ground and drags it across the ground, launching a torrent of debris and ice at you, knocking you off your horse.

This strike is easy to predict because he almost always uses it to start a battle, especially if you approach him on horseback. The I-frames will save you if you simply leap or double jump through them. Avoid sprinting on the horse because your initial response will most likely be to avoid the same button.

When you’re close enough, lock onto his left foot (the one with the red hair and the splint) and begin attacking. Once enough damage has been done to that leg, the boss will kneel down, and the threads above it will vanish. Take advantage of this opportunity to land a couple more hits before he regains his footing. When he does, lock onto the same leg once more; you can’t lock onto the other.

If you’re on the wrong side of the Fire Giant’s proclivity to roll to his left (and sometimes to the front towards you) during this phase, you’ll almost certainly die. Even if you roll into him, a simple roll will save you. This is one of the things that makes this fight so exhausting: every time he does that, he creates some distance between you and him, and you’ll have to spend a few seconds attempting to get closer to him again.

The saucer is also used in another technique that begins with a frontal slam and ends with a right-to-left swipe (his left to right). They’re sluggish and simple to avoid.

The Fire Giant will gain a couple more attacks when the red threads on his left leg break and the splint come off. He’ll first reach into his abdomen and take out a roaming fireball that will follow you around for a time before exploding. We recommend going close to the explosion and rolling away as soon as you notice it is about to go off. You can choose to stay away until it blows up on its own, but this will prolong the battle.

Another move to be aware of is a fire throw, which you can escape by dodging. It has a quicker casting animation, and you’ll see him open his palm towards you before he really executes it.

Finally, the boss will slam his saucer into the ground every now and then to create a well of fire around him, which will most likely catch you if you’re behind him or to his sides. When you notice him ready to slam the ground, roll away to avoid the fire sprouts, and don’t approach him until the attack is finished. By slamming his hand to the ground, he may conjure the same well of fire.

It’s possible to hide under his left foot and avoid the fire (while continuing to assault him), but it’s hazardous. Only do this if you’ve been through the fight a few times and know exactly where the safe spot is.

When you come too close to him, he will alternate between stomping his right and left foot. These have also been well-foreshadowed. You’ll see him lift his foot and then lower it a split second later. To avoid taking damage as it lands, time your dodge.

In general, seeing the braids around his waist move can help you figure out which assault he’s about to launch in this phase. For example, they fall to the ground as he begins the wind-up (crouches) for his role.

The Fire Giant is now on his knees, and he will stay there for the remainder of this phase. He begins phase two by placing both of his palms on the ground, creating fire wells all around him. Stay away and take advantage of this opportunity to remount your horse, which you should strive to do in the second phase.

He’ll also lean back and shoot a random pattern of scorching pebbles from his chest. Stay under his back and use it for cover if you want to dodge them. In this phase, your main goal is to just go behind him and stay there. This will protect you from a wide range of strikes, but it may make it more difficult for you to figure out what he’s going to do next.

The Fire Giant is less mobile in this phase, but his attacks have wide arcs that are easier to escape while riding. Despite this, he will occasionally roll to the left (and occasionally the right). He’s really attempting to reposition himself so he can attack from the front, but every time he does that, you may loop around to his back on your horse.

If you stay behind him, which you’ll need to do frequently due to his high HP, you’ll be able to land multiple strikes. If you find yourself in front of him and at a distance, be aware of a one-two fire spell throw, which you may easily evade by dodging twice (or jumping twice on horseback). This move’s animation is brief, so keep an eye on it. The direction in which the spell is cast is also misleading, as it appears that it is not aimed at you. Don’t worry about it; just dodge the fireballs as they escape his palm.

In this phase, the enormous roaming fireball reappears, but there are now two of them. The strategy is the same: wait for the explosion to happen before dodging or sprinting away so you can concentrate on the boss.

The Fire Giant will start doing a left elbow drop a little later in this phase and will lay there for a few seconds. Because his hitbox is rather huge, avoid getting caught beneath his side when he descends; you’ll almost certainly die. You’ll be confronted with his buttocks if you dodge into him, so keep attacking.

The Fire Giant drops 180,000 Runes and the Remembrance of the Fire Giant, which may be sold for 30,000 Runes or traded for a new weapon (Giant’s Red Braid) and incantation (O, Flame!) at the Roundtable Hold. More information on Elden Ring can be found on our comprehensive Elden Ring guide website.