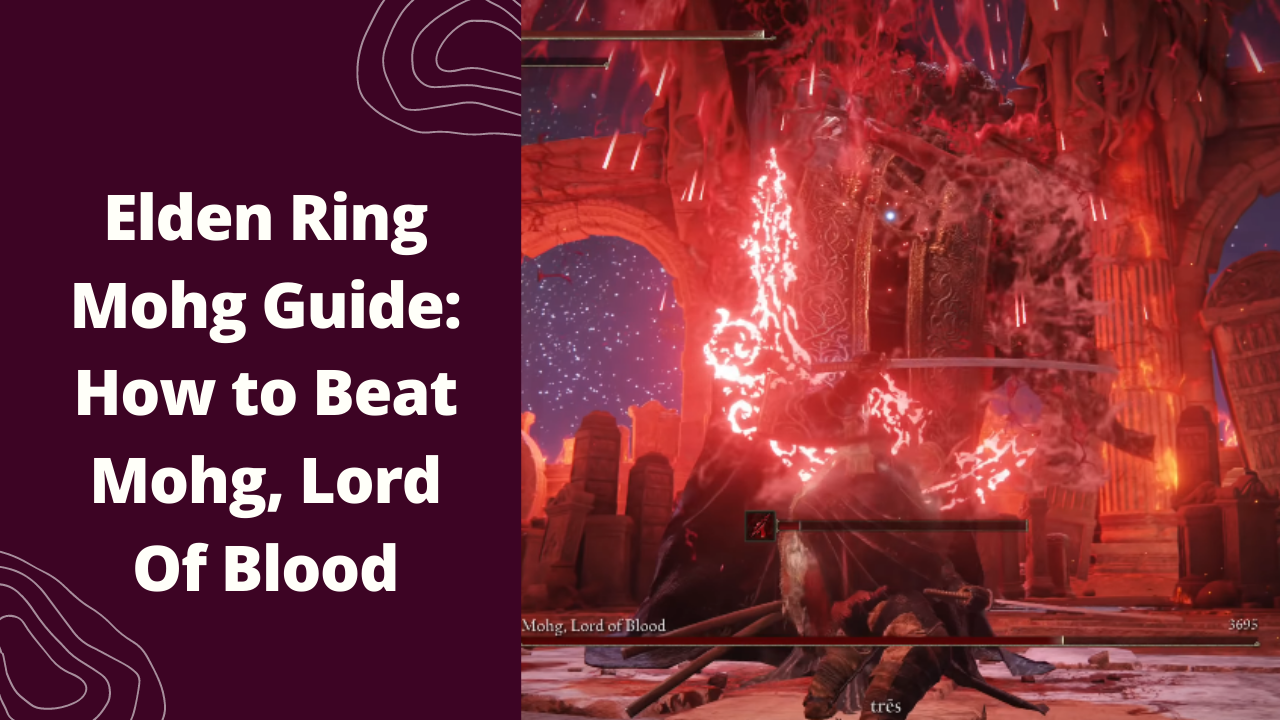 When you confront Elden Ring Mohg, either The Omen or the Lord of Blood, you’ll have blood on your hands, especially now that you know his attacks from this Elden Ring boss guide.

Mohg is actually two bosses in Elden Ring. Mohg, the Omen, his lesser form, resides in the Cathedral of the Forsaken, deep under the city of Leyndell, the Royal Capital. The complete combat is against Mohg, Lord of Blood, with numerous phases in a genuine arena rich with storey significance.

The Frenzied Flame ending, acquired through Hyetta’s questline, requires defeating the Omen. One of the shard bearing demigods who lives in Mohgwyn Palace is Mohg, Lord of Blood. The Pureblood Knight Medal obtained during the Bloody Finger questline or the gateway in the Consecrated Snowfield are also ways to access the palace.

The battle beneath Leyndell is limited to the first phase, which does not necessitate a lot of room for maneuvering. The battle against the Lord of Blood will take up all of his palace’s area. No matter where you confront Mohg, here’s how to defeat him.

When in the Elden Ring should you battle Mohg, Lord of Blood?

In Elden Ring, Mohg, Lord of Blood, is a completely optional boss. You don’t have to fight him to get to any of the game’s endings. Because Mohg is a demigod and a Shardbearer, you’ll be rewarded with a Great Rune if you defeat him. However, because this great rune is mostly aimed at PvP players, its abilities will not assist most PvE players.

Still, if you’re looking for a challenge, this encounter has an intriguing gimmick to experience. We recommend leaving Mohg till the very end of the game, either after properly defeating Godfrey or just before.

Because Mohg’s fight requires a lot of HP, it’s advisable to try it at character level 135-145, especially with a fully upgraded weapon, which means +22/+25.

In Elden Ring, how can you make Mohg, Lord of Blood,’s battle easier?

The boss fight with Mohg is difficult, especially if you take a bit to figure out the gimmick and how to effectively deal with it. To make the fight a little easier, we propose summoning a Spirit Ash, like we always do.

Mohg, like his sibling Morgott, is vulnerable to poison, so the Spirit Jellyfish will come in handy here. Alternatively, any other heavy or tanky Spirit Ash will suffice. Even the Mimic Tear from after the nerf will work.

Mohg can also absorb frost damage, which causes him to slow down for a short period of time. Because most of his attacks aren’t ultra-fast, it’s not the most useful status effect for this fight, but it’s something to think about.

However, Mohg’s Shackle, an item that ties Mohg for a short period of time, might make the opening phase of the fight a breeze. Mohg’s Shackle is identical to Margit’s Shackle, which you might have used against his brother.

What is the location of Elden Ring Mohg’s Shackle?

Without Mohg’s Shackle, it is certainly possible to defeat Mohg, Lord of Blood. If you do bring it, you can only use it twice during the initial phase of the battle. It may be used from any distance and will trap Mohg for a few seconds, allowing you to continue dealing with damage.

Mohg’s Shackle can be found deep beneath the Royal Capital of Leyndell in the Subterranean Shunning-Grounds.

Begin by heading down the north-western stairwell from the Avenue Balcony Site of Grace. After passing through the entrance, turn left and leap down to any nearby roof, as this region is guarded by multiple tough Leyndell Knights. After you land, take the second right, and you’ll find a well that we want to go down. Go down the ladder and open the door on your left. Continue through the tunnel and to the southeast.

Go through the entrance at the Underground Roadside Site of Grace, turn left (east), and descend the ladder on your right. You’ll be in a dark area with a lot of big pipes and a lot of imp opponents ready to ambush you.

Our goal is to make it all the way to the bottom, where the enormous crabs are waiting for us. However, because this is a significant decline, we’ll need to soften it. The best method to achieve this is to jump straight forward onto the pipe with the wooden plank, then down to the pipe below it on your right. You should be able to safely descend to the lowest level now. As soon as you land, make your way to the room’s southern corner.

This is Mohg’s Shackle, a big crab guarding an item atop a dead body close to the wall. Grab it and make your way through the hole in the wall. The Leyndell Catacombs Site of Grace is located on the next right. You might wish to enter the room first before attempting to grab the shake, so you don’t have to respawn at the very top if you die.

All that’s left is to attach Mohg’s Shackle to your purse or toolbelt for quick access.

In the Elden Ring, how do you beat Mohg?

The Pureblood Knight Medal gives you access to Mohg, the Lord of Blood, much sooner in Elden Ring, but if you never find it, Mohg, the Omen, is likely to be your first encounter. However, neither is a sure thing because they’re both well hidden.

The methods you adopt against one will carry over to the other, albeit fighting the Lord of Blood first will make fighting the Omen much easier. At the palace, his shard bearer version has more health, deals more damage, and is in a completely different phase with a lot more to learn. The initial phase/omen struggle is covered in this section. The attacks from the first phase will continue into the second phase, as they always do.

The first phase of Mohg’s battle is by far the simplest. You begin on opposite sides of the arena. Begin by summoning your Spirit Ash, and bear in mind that Mohg’s Shackle can be used twice throughout this phase.

Mohg has a limited number of attacks in this phase. His trident attacks, which can be delayed, can be dodged, or blocked. His Blood Claw strike is particularly misleading because it has two versions.

Regardless, every Blood Claw assault will deliver damage and trigger an explosion in the air if it connects. If you dodge the first, you might not be able to evade the second.

Keep your eyes peeled for his left hand. Because the animation is slower and better-telegraphed, the front-handed Blood Claw strike is the easiest to evade. A trident swipe is usually used as a follow-up.

The trident rushdown follows the back-handed variation. Along the journey and at the last impact of the animation, this charge will cause damage. The Blood Claw with the backhand usually comes out faster than the one with the front hand. You can dodge into him to avoid the trident charge if you dodge away from the claw attack.

Mogh will occasionally stretch into the air with his left hand, causing a blood spray. To prevent it, simply move away.

Mohg also has two additional trident attacks in this phase. In the first, he places it on the ground. When you see him doing this, run away from the area where the trident was planted, as you’ll be hurt if he pulls it out. In addition, the boss raises the trident to create a brief blood rain and buff it for one move. Both can be avoided by simply rolling away.

Several times during this phase, Mohg will cast a curse mark (a crimson ring) around you. There’s no way to avoid it or get rid of it, but you’ll hear him say “Tres, Duo, or Unus” with each one, which denotes hitting a different health threshold.

Because the main fight begins in the second phase, your aim in this one is to use as few flasks as possible, as you’ll need them in the second.

When Mohg’s health reaches 50% or less, he’ll begin the shift to phase two. This is a crucial point in the fight, as if you don’t know what to do, you won’t make it to the next phase.

The arena will turn red as Mohg raises the trident with both hands. He’ll yell “Nihil” three times, each time-sapping your HP to heal himself. Because each yell interrupts your own healing, you’ll want to time your flask chugs to replenish your HP before you’re completely out. The best moment to do it is between the second and third Nihil, depending on how huge your personal HP pool is.

Because Mohg takes damage during this transition, don’t be scared to hit him while he’s casting. When he’s finished casting, the more blows you land, the lower his health will be.

This phase is difficult because Mohg will acquire wings and all of his strikes will be enhanced with blood and fire damage, so avoiding the initial hit will no longer be enough, as it was in the first phase. He also has a habit of covering the arena in blood and fire pools, making it difficult to travel while trying to keep an eye on him.

While your summon should keep him occupied with part of that, you should wait for an opening before attacking. All of the phase one attacks are still active and have been enhanced.

A five-hit combo that begins with Mohg levitating to cast a brief blood shower quickly descends to conduct a wide swing and an upwards swing, and closes with Mohg jumping up and landing to plant the trident into the ground is new to this phase. When he removes the trident, this final attack also results in a large flame explosion. This is the most hazardous combo in the fight, as any of those attacks will deal significant damage to you.

When he isn’t doing that, he will use his wings to increase his leap attacks, which can be avoided by rolling into him.

In Elden Ring, how can you restore the power of Mohg, Lord of Blood’s Great Rune?

Mohg is the only other demigod Shardbearer whose Great Rune can be awakened at the Divine Tower of East Altus, as he is Morgott’s brother. You should already have access to that tower if you fought Morgott. Simply return to the top of the screen to activate Mohg’s Great Rune.

Only the Divine Tower of East Altus has the ability to activate multiple Great Runes.

Our renowned Elden Ring guide is still growing. For example, the Smithing Stone page has recently been updated with even more bells, allowing you to purchase limitless upgrading materials.