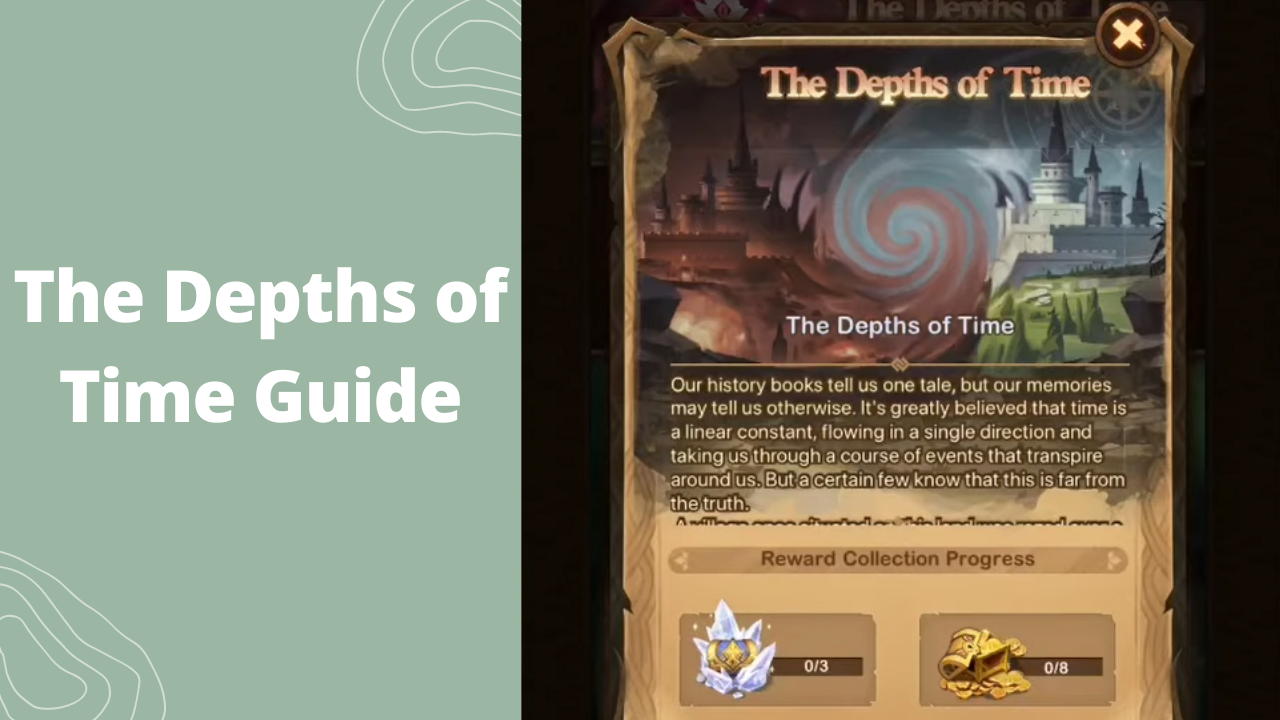 The Wandering Balloon is a new gaming feature in AFK Arena that allows us to re-play former Voyage of Wonders realms, and The Depths of Time is the first featured realm there.

I’ve updated this guide with the creators’ tiny tweaks to provide you with the most up-to-date summary of how to solve The Depths of Time step-by-step.

The Depths of Time are essentially a time-divided map – or, to put it another way… The map’s general layout is the same on both sides, and you can travel between them using portals.

Every time you pick a relic on one side, it blocks a path on the other, thus choosing the right path through the realm is crucial.

There are no mercenary camps, resurrection stations, or healing fountains, so you’ll have to fight your way through the entire area with your own team (and possibly a borrowed hero).

Now, this may appear difficult, but it’s actually one of the easiest realms in Voyage of Wonders, and I’m delighted they chose it.

What Is The Reward For Going Into The Depths Of Time?

We had 2,000 Diamonds, an Emblem Choice Chest, and Faction and regular summon scrolls in the original version of the Voyage of Wonders.

The rewards now consist of certain emblems (heroic and normal, but no faction emblems), 10x Regular Summon Scrolls, and 480x Rare Soulstones, which equals 8 fodder heroes. After all, it’s not horrible, although I’d prefer some faction symbols.

Walkthrough for The Depths of Time

So, without further ado, let’s get started with the step-by-step instructions.

In the first section, you’ll use the portal to travel to the settlement on the left side. There will be additional camps appearing there, as well as the clearance of certain paths on the current side. Do not engage in combat with any camps and return through the portal to acquire all of the chests you can.

After that, return to the bottom of the right side and pass through the portal to the left side, where you can now combat all of the camps except two.

If you clear them all, your road to the center portal will be entirely blocked, and you will have to start over!

Now, through the portal, return to the left side of the map and walk up to the middle portal, where one camp stands directly in front of it:

If you use it right now, it will blow everything up, and you will be unable to reach the last monster.

Clear all of the camps in the center portion on the right side of the map, then step on the city and clear the ambush there – this will summon the final boss.

After then, stay on the left side and work your way up to the top part, as shown in the photo on the right.

Do not enter the top portal until all of the camps on the left side of the top have been fought and the Crystal Chest has been recovered.

You must beat the boss within a specified period of time, or he will fire a spell that restarts the combat – quick damage is crucial here, so send your heroes into battle quickly, even if you lose some. You won’t be able to beat him if you don’t do enough damage early enough.

You can now get your second Crystal Chest with the Wish Chest reward if you’ve done that.

Now is the time to obtain the last chest, and if you follow my approach, the best way to do so is to complete the adventure and then start afresh run solely for the last chest.

Return to the Wandering Balloon menu and complete the adventure before starting it over.

It may appear unusual, yet it is the most straightforward method for resolving Depths of Time.

It’s now very simple to get there:

1. Step into the city without battling any camps by going via the bottom portal to the left.

2. Return to the right and walk up to the middle doorway, which you should use (one camp in front of it that you need to fight)

3. Now you utilize the fire that I warned you not to use earlier.

Zolrath will be furious, but you can now return through the center portal and pick up the last missing Crystal Chest, and you’re finished.