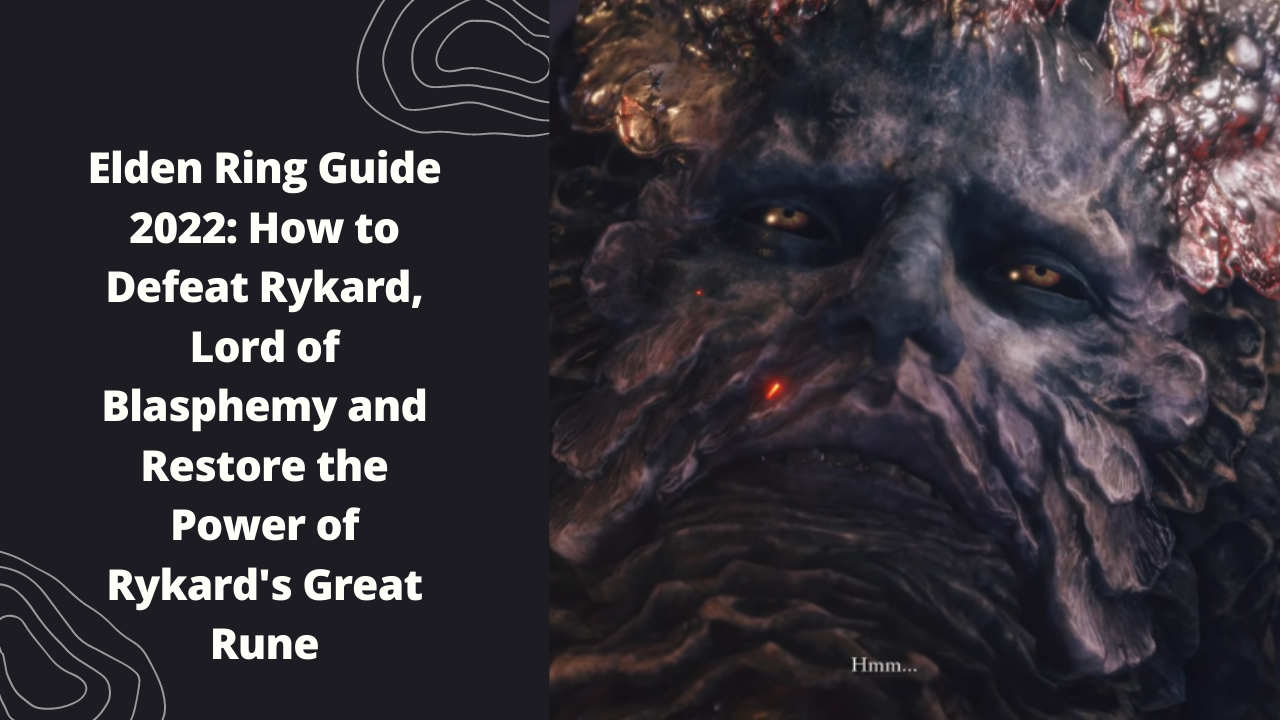 Elden Ring is full of over-the-top boss fights, but only a few of them is gimmick-free. Elden Ring Rykard, Lord of Blasphemy, is one who does so in a positive way. While Rykard’s fight isn’t as challenging as some of Elden Ring’s other demigod bosses, such as Starscourge Radahn, if you don’t stay on your toes or fail to properly use the equipment the game strongly suggests you should exploit, he can quickly knock you out. Fortunately, a little planning ahead of time will assist you in taking him out.

You’ll have to travel through Volcano Manor to confront Rykard and claim his Great Rune for yourself. Here’s how to get to Rykard’s boss room, as well as some helpful hints on how to defeat this Shardbearer.

In order to approach Rykard, the lord of Volcano Manor in Elden Ring’s Mount Gelmir district, you can take one of two paths. Complete numerous contract killings for Lady Tanith in Volcano Manor, and she will grant you an audience with the serpentine lord. However, you can also go to Rykard on your own by following Hayden’s Elden Ring walkthrough’s Mount Gelmir part.

At first, Rykard appears as a massive God-Devouring Serpent coiled in a flowing pool of lava in the heart of Mount Gelmir. It’s a dangerous foe, but not quite as terrible as the second phase, when Rykard, Lord of Blasphemy, awakens and begins to use all of his might to defeat you.

If you have the correct tools, you can give yourself a much better chance of defeating this formidable shard bearer boss. To begin with, watch the video below to see how I handled the fight with Rykard. After that, scroll down to discover our best advice on how to defeat the God-Devouring Serpent himself.

How to Defeat Rykard, Lord of Blasphemy: Elden Ring

On this page, we’ll show you how to defeat Rykard, Lord of Blasphemy in Elden Ring. We’ll go through the enemy’s characteristics, boss fight methods, tips and tricks, and item drops.

An Overview of Rykard, Lord of Blasphemy

This boss encounter has two phases: the first pit you against Rykard as a serpent, and the second pits you against him as a human. However, there is a simple approach to going through both periods without getting hurt. To begin with, you must pick up the Serpent-Hunter from the dead body in front of you when you enter the boss arena. This is the weapon that will be used to combat the boss.

In the initial phase, where you’ll be fighting a snake, the head of the beast attacks you with its fangs, grabs you in its mouth, and spits poison. There is a way to completely avoid it all. You must run directly into the fire and remain there for the length of the battle. We’re talking about literally going up against the boss. Being in the fire will cause you to receive constant damage, but it will be minor if you have the Flamedrake Talisman on you.

With you in this position, just a small percentage of its strikes will be able to hit you. As a result, spam the Serpent-assaults Hunter’s and you’ll finish the first phase in no time.

The Lord of Blasphemy, Rykard, will appear in the second phase. The plan, on the other hand, stays unchanged. Run into the fire that surrounds the boss and fight it until it is defeated. You’ll have to look out for one attack in which it jumps and inflicts harm on the surrounding area, but it won’t kill you. When you need to heal, do so, and keep attacking until it’s dead.

In Elden Ring, how can you restore the power of Rykard, Lord of Blasphemy’s Great Rune?

Now that you have Rykard’s Rune in your possession, it’s time to level it up so you can use it. The Divine Tower of West Altus, located southwest of Leyndell, the Royal Capital, is the only place where Rykard’s Rune can be recharged.

You may or may not have found this Divine Tower on your own, depending on how carefully you investigated Lyndell before killing Rykard. The Divine Tower of West Altus is hidden behind a series of illusory walls and can only be accessed after defeating the Onyx Lord boss guarding the tower’s entrance.

To get inside this location, you must first find the Sealed Tunnel, which is located west of the Leyndell wall, just south of the lake that runs along that side of the wall.

Head straight east from the Outer Wall Phantom Tree Site of Grace until you reach a cliff. Jump across the chasm and continue down to the pond with the Land Squirts and turtles. The entrance to the Sealed Tunnel is located south of that pond.

To go deeper into the tunnel, you’ll have to hit four false walls on the inside. In the first area, the first false wall is directly behind the chest. Take the elevator to the bottom floor and go straight ahead when it stops, revealing the second wall. Continue walking until you reach the corpse with the object on it; the third wall is behind it.

Continue east on the branch, then turn left on the branch to your left and through the eastern wall’s door. A couple of horizontal tree stumps will impede your way; slide down below and avoid the explosive traps. Behind the stack of boxes on the south wall is the final phantom wall (but watch out for one final trap). The boss arena may be found at the bottom of the stairs. If you defeat the Onyx Lord, you’ll get entrance to West Altus’ Divine Tower.

In our comprehensive Elden Ring guide, we offer a plethora of other useful boss fight advice, such as this one. Why not explore how you can simply defeat Starscourge Radahn now that you’ve gotten this far in the game?

These are the best Rune farming locations in Elden Ring if you need a level increase.

Do you have any other advice about defeating Rykard, Lord of Blasphemy in Elden Ring? Comment below with how-to cheese for other boss encounters, and be sure to check out our Elden Ring map guide for more advice and information.