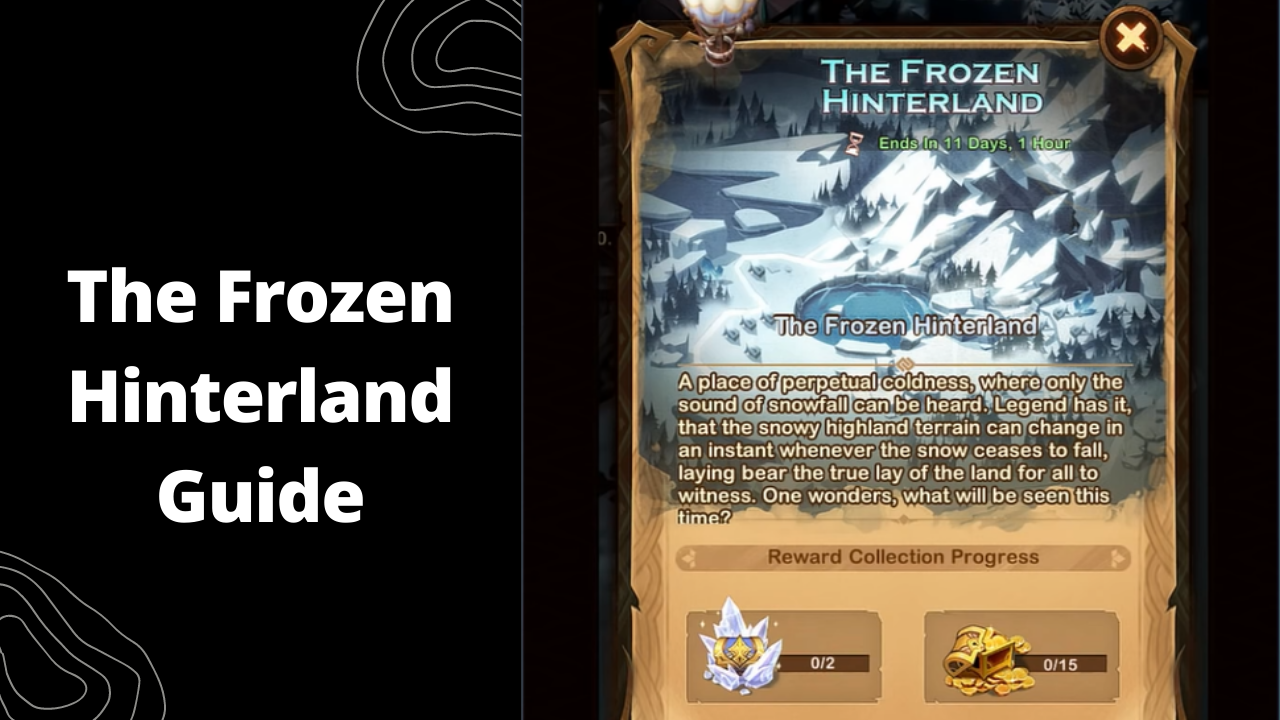 The Wandering Balloon is a new game feature in AFK Arena that allows us to re-play prior Voyage of Wonders realms, and the first one included is The Depths of Time, a fantastic Voyage of Wonders that we had back in May 2020.

So, as always, I’ve included my step-by-step tutorial for this realm, which you can use if you get stuck or if you don’t want to solve the problems yourself.

General Information and Rewards for the Frozen Hinterland

The main goal of The Frozen Hinterland is to clear your passage through the lasers in order to obtain the hidden weapon that will aid you in defeating the final boss.

What Does The Frozen Hinterland Have To Offer?

Of course, the incentives have changed since Voyage of Wonders; for example, completing the Frozen Hinterland in the Wandering Balloon will award you.

In Voyage of Wonders, the main prize was much nicer, but now the Crystal Chests reward you with 4x Faction Summon Scrolls and 777 Diamonds.

There are enough Soul Stones (180 Common & 30 Epic) and Poe Coins in the Gold Chests to pull some excellent furniture.

Walkthrough of the Frozen Hinterland

Let’s go right into the tutorial, where I’ll teach you how to conquer The Frozen Hinterland and defeat the final boss.

Step 1– You will immediately notice two camps that will provide you with relics.

If you finish those battles, you’ll reach a red laser that will block your passage to the north.

Walk to the left side of the map to begin accessing The Frozen Hinterland map.

Step 2– Now that you’ve found the red lever, the first thing you’ll want to do is lower it to get the barrel to the lower ground level.

After that, fight your way past the two camps, then use the cannon to destroy the barrel.

There’s one more thing we need to accomplish before we head up there.

Step 3– The red lever also opened up a path to the north of The Frozen Hinterland, which you must now take.

Use the green lever there to raise the greenstone with the cart on top; this is necessary before we proceed to the next section!

Return to the place shown in Step 2 after you’ve utilized the green lever.

Step 4– step on the red stone and then pull the lever to reach the higher section.

You must fight through various camps until you reach the snowball cannon and the blue lever.

Step 5– First, raise the blue stone with the blue lever, then use the snowball cannon to throw a snowball into the course of the blue laser. Return to the ground level by using the portal now.

Step 6– Use the red lever to lower the red stone to the ground and go up to the snowball cannon.

To get to the next section of The Frozen Hinterland, shoot the snowball cannon so the snowball lands on the bluestone, then step on the greenstone and use the green lever.

You’ll see the monster here, but you won’t be able to defeat this 5x Talene arrangement without using the special weapon right now.

Step 8– Make sure you obtain this camp and chest, or you’ll be unable to reach it later and will have to complete an extra run simply to get that usual chest.

Use the gateway there to return to the ground of The Frozen Hinterland once you’ve defeated them all.

Step 9– The blue laser must now be stopped by the snowball on the blue stone. To do so, return to the portal and place the red lever on the ground, step on it, and ascend.

After that, use the blue lever there. After that, return to the ground level by using the portal.

Step 10– I know it’s a lot of walking, but now you’re going to lower the red lever and then go to the greenstone and use the green lever to climb back up.

Now travel to the very right side of the room, where you’ll find a camp, a chest, and a yellow lever.

Fight the camp, take the chest, and activate the yellow lever.

This will make the boss fight easier, but you’ll need more relics to do so.

Step 11– Head to the north, where you’ll discover more camps to clear out, as well as The Frozen Hinterland’s secondary boss encounter. This boss fight should be easy, and the setup is adequate.

If you’re having issues, you probably have some bad relics and will need to re-run The Frozen Hinterland, but I’ve never had any issues with it.

Step 12– Return to the ground-level portal and prepare for the main boss encounter. The 5x Talene is unbeatable no matter what relics you have, but you can now make them vanish by utilizing the cannon at the bottom.

The cannon will shoot directly at the boss, causing it to vanish.

Step 13– The issue now is that we need to shift levers once more in order to reach the Stargazer Cards chest. To accomplish so, return to the green lever, walk to the far right side of the map, and activate the yellow lever, after which you can simply retrieve the chest.

As I previously stated, there is just one secret 777 Diamonds chest left.

To reach there, you must pass through the blue portal three times and then the orange portal once more.

If everything goes according to plan, you’ll end yourself behind this last camp.

Now you must face the 5x Talene, although they are really low level, thus beating them isn’t particularly difficult if you have a carry hero like Shemira.

To get the chest, stand on the white tile where the camp used to be, and the hidden chest will appear.