It has remained a grey area for many new players that have come and remained here in the Ghost Battle mode. There are continuous matches that come along with the rankings against the AI. It was previously introduced in Tekken 5. So, if you have been an age-old player, you will understand what are we trying to convey here. Other players will feel like you’ve been promoted directly to the Warrior rank.

There is no doubt that Street Fighter V had a much easier ranking system to be followed upon. So, once you start with the ‘Rookie’ right before you head to the next stage of bagging Platinum, gold, bronze, silver, and diamond ranks; You will be intensifying your pace level with three levels; and then comes the super and the ultra level. Once surpassed these stages, you will be able to get a few league points, the Player will reach up to the next level and will understand the whole system entirely.

All the players work throughout and according to their scope, for example, They move from G rank to the A rank then they reach to the S rank. It includes five levels which start from G5 to G1 and it goes on and on.

Tekken 7 ranks are much convoluted and get a grip once the process gets smooth. However, being said that, in this article, we are here to make the process easier for you hopefully. This will give you a detailed guide on how to understand the ranking system better.

They have never released any official guide. Bandai Namco Entertainment has no ways to track the progression and the other players were fumbling on how to move up to the ladder. They have tried hard to predict on how to get the promotion. Let’s say, for season two, the entire team has introduced a new progression that will pop up by the end of the demolition match. However, that will help you in understanding how many points you have achieved so far and how close you have come in order to get the promotion.

Prior to the initial season, all the players will be needed to achieve a few more points. Why? Because they need to win promotions and such that they can welcome more newcomers in the game. The number may vary from different levels, starting right from the initial rank. It will help you in understanding the procedure of the points system and will give you a highlight on how the entire process works. Let’s throw some shade:

This is yet another point that needs to be highlighted. There are many infinite rematches that are worth nothing and are only made possible in the game of the Tekken 7. ’Boosting’ is another essential element that has remained prevalent in this game. So, even if you’re playing around in a matching mood, it will help in colluding with your friends and other players. You can easily play against the weaker players and get promotions accordingly. It will also decrease the possibility of any strong built players in the game. One of the famous criticisms that this game has seen is unlimited rematches. Let’s help you make this game experience a little better! So if you lose fewer points in the game and you gain for a win, that will basically undermine your online ranking experience. There shall also help in gaining more and more promotions and will give you more rewards.

There are multiple points that one needs to touch upon as each ranking comes with a different perspective. Therefore, to have a better perspective one should understand how the Bandai Namco works out at each level.

It has a starting point for every player, be it a beginner or an expert. The game Tekken 7, uses the first time players especially. All the players at this level are largely known under the button mushrooms that are still learning the ground rules and the basic roots of the game. With each and every character, you get to explore a different perspective of the game.

After 1st kyu, a player will enter the silver ranks at 1st dan. Basically, these all are the extensions of other kyu ranks, but by this point, a player will have typically understood the bare basics of the game, as well as some of the chosen character’s key moves and basic combinations.

Even when they arrive at the silver ranking, all the players start learning the process. If not, they are able to recognize what other ups and downs each character comes along with. Rest, they use their own knowledge to prop up the offense.

There are orange ranked players at the Vanquisher. It includes the advanced techniques that help in focus attack or the Mishima wavedash. Try this, and this will surely take your game to the next level by catching off-guard gimmicks.

All the Red rankings are supposedly for the players that encounter various opponents for the first time ever. All the players at this level understand the basic matchups and have a good knowledge of the myriad of characters. It comes under the first level of play that creates various setups and also helps in defeating the opponent. It remains unfamiliar with various gimmicks.

It comes beside the ruler ranks. To summarise, it is an extension of the red rankings. All the players have their share of experience and until this point, all of them have started under the frame data knowledge. There are a variety of situations that come along, and once again creativity remains the key factor that sets up all these players. No, they do not work against each other but rather collaborate.

All the players that come under this umbrella, are one of the ideal matches that have always won and are super creative! The sharper their movement is, the better they are decision-makers. All these players use specific data knowledge that helps them in discovering different moves for different situations. Although, this comes along with different matches that are set up on the fly.

So once the player has managed to get pass through the Tekken 7 God rank, They will reach up to the peak that is the mountain level. It is also known as the Tekken God prime. So if you’re excited, drop all the comments down below. 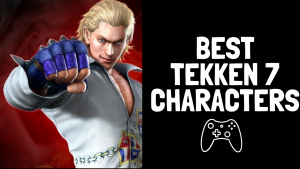