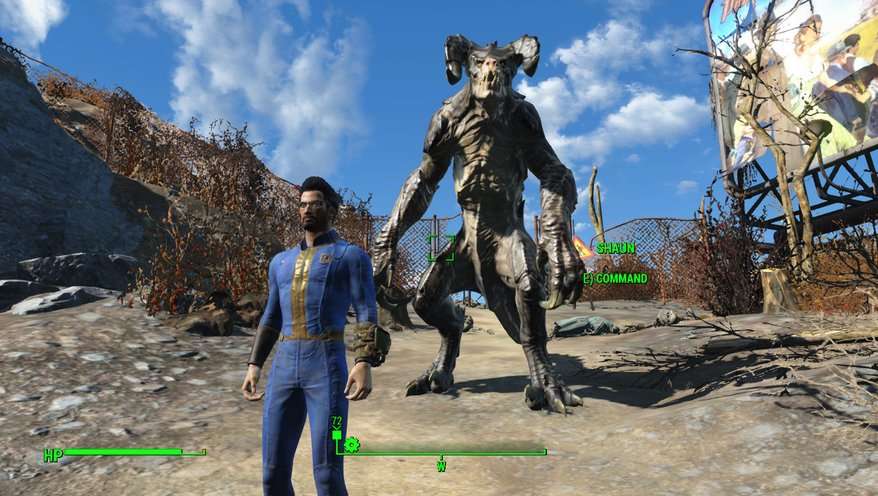 A modification, or mod, is an altered version of a game that is creating by giving a new shape to the vanilla code. These codes are altered by enthusiasts of the game to fix bug issues, introduce new levels or even add a new angle to the lore. They are like fan-fictions for games. Some modifications are so well-made that they’ve been made available for purchase or published as full-fledged games. One such game that was a subject of such modifications, was the highly popular Fallout 4. The landscapes and the top-notch fine detailing were absolutely gorgeous before, but with the new modifications, the game has transcended all levels of astoundment.

As die-hard fans of the game ourselves, we have had our eye on Fallout 4 mods ever since the title was released. Here is a list of the best Fallout 4 mods that we think will surely blow your minds. Buckle up, squad!

It was a little unsatisfying to watch the character you are playing eat something unsavoury because it was on the top of your inventory, like Bloatfly meat (Yikes!). No offence to Bloatfly though. It made the game slightly unreal, seeing the Sole Survivor not being able to eat what he gathered on the plates after picking them up and instead filthily putting them in his pockets.

With the Grab and Eat all-in-one Mod, you CAN eat whatever edible you grab! This mod added the ‘Eat’, ‘Drink’ and ‘Equip’ features that let you eat drink and equip things right on the spot without having to open the inventory again.

Cartographers Map Markers allows you to add over 400 additional markers to your map so that you can remember the places you want to visit again and their addresses. It eliminates the single marker, which was inconvenient to use if you had numerous items to mark. The developer has put in indescribable effort in the mod, it seems. The markers have a unique name that is basically a clue for where the supposed mark is. Another reason why it is one of the best Fallout 4 mods? You can even teleport to a mark on the map!

Also Read:-
1. Best Fallout 4 Weapons Guide
2. Every Bobblehead Locations and Where to Find them?
3. Best Builds and How to Construct the Ideal Statement

The Beast Master allowed access to many wild creatures in the game and control them better. This feature helps the players in choosing one of the creatures as their companions. Names of the pets can be renamed with this mod. It truly saved our Sole Survivor from getting in a Dr Frankestein predicament because Dogmeat was getting boring.

Lying at the brim of the best fallout 4 mods that are surely on our bucket lists, this modification improved the quality of texture in the game’s display to a great extent. Despite the game’s exhilaration and popularity, many players, particularly those who play on consoles, have complained that the texture quality falls short of expectations. The Texture Optimization Project improves the texture quality by sharpening the images and making them more appealing. So, if you’re not happy with the display quality of the vanilla game, give this one a shot right now.

Probably one of the coolest and best fallout 4 mods of all time, the Robot Home Defence lets you experiment with the game’s enthralling robotic system. It allows you to build robot slaves and use them to defend yourself. Players may deploy robots to build fortifications around their villages. You can custom create an AI slave for guarding your buildings against raids. Let them know who is the boss!

This mod enables a SimCity system with creativity that went off the charts. Players can create towns in newer ways, you will be able to create hundreds of structures in your settlements using the same design and patterns as in The Sims. You can zone your settlements and the NPCs expand on their own without having to micromanage. Your settlers will build their own homes and businesses, as well as cultivate their own crops. It will provide you with a new perspective on your structures as well as the unique experience of playing a hybrid game.

One of the most popular mods of Fallout 4, this mod brings rectifications instead of features or designs. Fallout 4 isn’t exactly a bug-free experience, as is the case with most Bethesda games. At times, a number of issues hinder the overall experience. Unofficial Fallout 4 Patch is a must-have for any Fallout 4 player as it aids in resolving issues with the vanilla code. It eliminates all bugs and errors from the game, ensuring a smooth and trouble-free voyage in the world!

Again, one of the coolest and best Fallout 4 mods, the Vertibird feature is pretty charming. You can live in it and, although it doesn’t fly, you can plank craftable landing zones down and transport there through the Vertibird. The mobility is comparable to rapid travel. The living quarters inside it are cramped and you have to feed the bird coolants at regular intervals, it is a charming house with a bespoke crafting bench and mounted turrets to keep the neighbours at bay. One for the aesthetics!

This mod finds its sweetest spot in the list of best Fallout 4 mods because it has saved players so much time that was otherwise gone in sitting through boring repetitive intros. While Fallout 4 is a really engrossing game, we must agree that repeating the introduction across several playthroughs make you feel old. Start Me Up allows you to change the backdrop of the game. There are several options like quick start, alternate start and normal start. Furthermore, instead of the emotional backdrop of Shaun’s, you may add a variety of background themes. It also has an impact on the discussions in the game’s introduction, providing something new and exciting to keep you entertained.

With so much emphasis on construction in Fallout 4, it’s surprised Bethesda didn’t consider this. In your workshop, you may make your own settlers using this mod. Synthetic settlers. Turn off your radio beacon, because Synths will now be able to occupy your different outposts, presumably in a peaceful manner. This sits comfortably in the list of best Fallout 4 Mods because this is the ultimate DIY we wanted!

A  well-liked introduction when talking about the best Fallout 4 mods, this mod allowed players to see the dialogue options better and more clearly on the screen. It allows the player to speak in whole sentences rather than phrases, making it easier for you to choose between choices. There’s no denying that Fallout 4 is one of the greatest role-playing action games the industry witnessed. However, the consensus tipped towards the negative side when it came to viewing dialogue choices on the screen. It’s simply not there. By selecting a single option, players often received a completely different message, which caught them off guard and caused a lot of confusion. This mod nevertheless solved this issue. There is light after all, Glory!

While the Fallout series is known for delivering interesting and competitive role-playing games, texture issues were not resolved until the third instalment. In the fourth edition of the series, the graphics were improved even further. If you’re still unhappy with the texture and want it to be more clear, try this mod. One of the most valued and best fallout 4 mods to be developed, Vivid Fallout lets you customise the background and landscapes to make them more realistic. It improves the environment textures significantly and allows you to play the game with more complex visual effects.

You need people to rely on when things go a little out of hand in the battle. This Fallout 4 mod adds to the utility of your faction allegiances by enabling you to summon members of a Fire Team to assist you. Individual or groups of Brotherhood of Steel and Minutemen troops can be called upon. And if you to add a tinge of craziness, you can call tamed Deathclaws!

Fallout 4 is an action role-playing game that was first released in 2015 by Bethesda Game Studios. The game begins in a post-apocalyptic open-world setting. It’s a follow-up to Fallout 3 and the fourth instalment in the Fallout series. It is a very successful and highly praised game that earned a slew of awards in the very year it was released. This game was a smash hit in the mods community that gave users plenty of options to enhance their experiences in the wasteland. Hundreds of modifications are available on the Fallout 4 Nexus. Modding is a box of tricks that packs everything you need to make the game look better, add new features, or even play as a dog. The greatest and brightest minds on the internet join together to build more diversified environments, fix small niggles of the original gameplay, or just add something completely off-beat for the fun of it, and it’s because of modifications like these that titles like Fallout 4 have lived such a long life and have almost become a legacy.