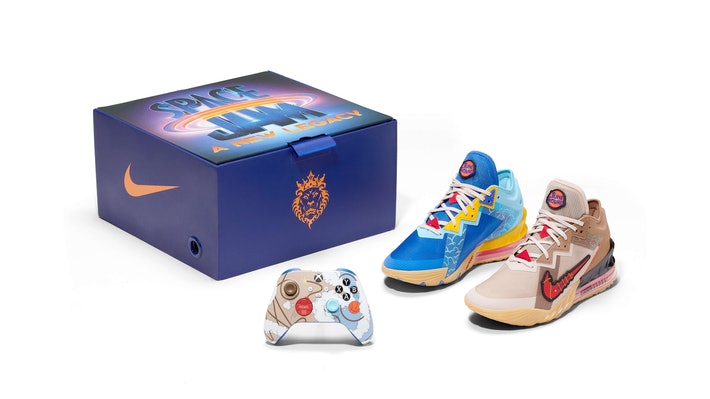 Space Jam: A New Legacy has yet to hit theaters, but there are plenty of ways for you to rep the franchise — more than 200 other brand collaborators are releasing products for the LeBron James-starring sequel. Just last month, Nike announced it would be dropping thematic apparel, jerseys, and sneakers, and now the Swoosh has added a film-inspired Xbox Wireless Controller and sneaker bundle to its lineup.

Taking inspiration from classic Looney Tunes rivalry, the commemorative set includes a Road Runner vs Wile E. Coyote Nike LeBron 18 Low and a matching Xbox Wireless Controller making this the first time a gaming controller has ever debuted on Nike’s SNKRS app. Consumers can use the product to play Space Jam: A New Legacy – The Game, the official film-inspired video game launching exclusively within Xbox Game Pass Ultimate Perks and available for free to everyone through the Microsoft Store in July 15.

IT’S GAME TIME — While the original Space Jam produced namesake Jordan 11s, this collaboration comes with a pair of LeBron 18 Lows thanks to the film’s change in casting. Brought to life by Nike Senior Designer of Footwear Jason Petrie, the thematic sneakers sport a mismatching look, with each sneaker representing a different Looney Tunes character.

Dressed in Earth tones and featuring a red Swoosh bearing the Acme logo, the left shoe honors Wile E. Coyote as he tries his best to catch Road Runner, who appears out of reach on the other foot. A dust cloud-like Swoosh on the right sneaker nods to his speed, while a blue upper with yellow accents makes the Road Runner tribute more evident.

Bringing the elements of each shoe together, the Xbox Wireless Controller shows the aftermath of a Wile E. and Road Runner encounter. Dust clouds make it clear that Road Runner has escaped Wile E. Coyote once more, as demolished contraptions exhibit the latter’s failed attempts. Memorable character phrases like “Yellow!” and “Beep! Beep!” appear on the sides of the controller for further commemoration.

THAT’S ALL, FOLKS — Those that are lucky enough to get the controller alongside the sneakers will own the full story of Wile E. Coyote and Road Runner — as well as a dope gaming fit. Consumers can get the thematic look on July 15, when the bundle of Lebron 18 Lows and Xbox Wireless Control drops on Nike’s SNKRS app.

Space Jam: A New Legacy comes out just the next day on July 16, though we’re sure we’ll see more thematic collaborations before then.