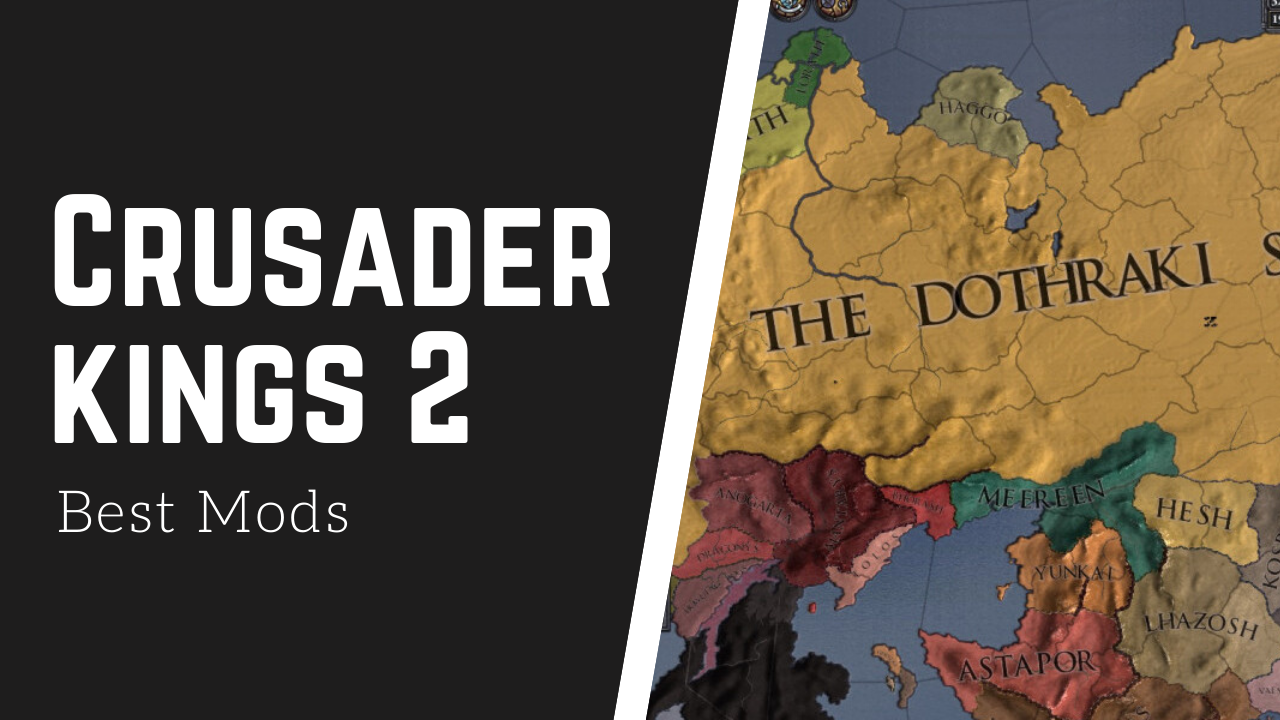 Developed by Paradox Development Studio and published by Paradox Interactive, Crusader Kings 2 is a sequel to the game Crusader Kings. Well, this strategy game has set his eyes on the middle age era, giving a total feel of the politics and the battles running in a kingdom. But well, the saga does not end here. The game gets more fun with the inclusion of MODs. Well, as it is said, MODs fulfill the holes in the game, which the developer forgets to imagine. So, if you are interested in the game, why not have a look at the best Crusader King 2 MODs.

With the inclusion of MOD managers and Steam Library, it has become straightforward to install any kind of MOD within minutes. On Steam, you just have to download the MOD from the discussion forum of the game, and it will automatically get installed. While in others, you might have to check for patch files and then, run the MOD set up separately.

The only problem with MODs is that these files are not approved and launched by the original game company. And so, installing them within your game can lead to a little problem sometimes. Problems such as ‘Save Game Lost’, ‘Game Crashing’, ‘Features Became Incompatible’ are the few that might occur.

But don’t worry, they have very little chance of occurrence. But well, before installing, make sure that your MOD is compatible with other already installed MODs on your game. This compatibility list can be easily found on the webpage containing the MOD’s information.

The Best of The Best CK2 MODs

Here are some of the best and the most preferred CK2 MODs.

Here are some of the essential MODs, preferred to be there in every Crusader Kings 2. Well, as the name suggests, these MODs are made to convert the game in a whole new form. They change the whole interface of the game, creating a whole new experience while not altering the base game. So, let’s talk about the best MODs in this category.

Well, there is a reason why this MOD is named after the game. This MOD is the best conversion MOD of all the MODs on the street. It changes the total look and feel of the game, changing the style starting from a change in map cores to characters to events. Well, not only aiming to add a new MOD, this mod changes the whole player’s gaming experience. It adds new provinces, adds new adventures, and the best thing about this MOD is that it is, by far, compatible with most of the other MODs.

‘There is only one thing we say to death: Not Today.’ Well, these are the words that every Game of Thrones fan will remember. So, if you are a Game of Thrones hardcore fan, this MOD is for you. The MOD adds the overly exciting political world designed by George R.R. Martin. Seeking to make ‘A song of Ice and Fire’ into the gaming world, this MOD changes the entire game to the real Game of Thrones. Not only adding characters but also changing the provinces to the series names and adding the exciting and thrilling adventure in addition to all-new game mechanics, this MOD will steal your heart. So, are you ready to defend your kingdom only to keep to titles First of his Name, King of Andals and the First Men, Protector of the Realm, and the Lord of the Seven Kingdoms?

When the people were getting bored with virtual and imaginary stories, this MOD came in the picture. Get ready to delve into history when the collapse of the Roman empire brought chaos to the very structure of the whole European civilization. Resetting the date back to 476 BC, the MOD brings about an overall new experience to the gameplay by adding new maps, new provinces, bookmarks, historical persons, stunning mechanics, and adventures. So, test your strategies in saving the empire. Will you be able to bring a sense of peace in the region?

Again, as the name suggests, these MODs are not for changing the game totally, but adding new historical characters, making the game close up to real-life history.

Take full control over your empire. Create your character with Ruler rights. Break every rule to reign. The inclusion of this MOD in the game makes it even easier to create your role as the lord of a kingdom. A path to unique and exciting gameplay, this MOD adds adventures and dynasties that you would have never been able to see in the original game. And not just know, you can be the ruler of one. So, rule wide, clear your path from the blood of your enemies and increase your empire all over the world.

Well, every game or MOD so far, is all about ruling and creating havoc for other empires. But none have yet revealed the exciting and intriguing life of a prince or princess. This MOD is all about the tasks, the inclusion in politics, and the heavy burden to rule the empire along with all the fun that comes with the royal blood. But well, you just don’t yet have to be prepared to rule a country or lead an army. So, why not have a little fun till then and create memories of childhood.

Finally, this MOD is not about adding a character, revealing another change, a change in the game design, or anything else, but about adding features to your character. And well, it is not just limited to standard features, but some interesting ones too. Everyone likes to think if he or she would have been born with unique traits, and so, with the inclusion of this MOD, you can add these traits to your character. Ranging from physical characteristics such as fluency and fertility, personal traits such as psychopathy and creativity, this MOD has many more fun characteristics. So, I will not reveal the surprise, why not install it now in your game and have a look at it.

These MODs changes the game by only a little amount. Adding some features just to elevate the gameplay are some of the motives of these types of MODs. So, let’s have a look at the best ones in the market.

By far, it is one of the most popular MODs. This MOD is exactly like its name. Having a significant capital by making it utterly indistinguishable as those of your competitors, this MOD lets you design your paths, secret passages, event holdings in a castle by giving you the right to build your castle. So, why not indulging in this MOD, getting a newer experience in the world of Crusader Kings 2, gaining the knowledge of how it’s like to build your stronghold and keeping your kingdom intact from enemy strategies? But well, no defense is impenetrable, so make sure to design an escape route too.

This MOD is not much common as others. Well, everyone will want to enjoy their games peacefully. While this MOD does not allow a player to build defensive pacts between religions, ssit is crucial indeed to create defensive settlements to make sure that no conflict occurs frequently. Even though there might be a lot of discussions about forming defensive pacts with others on the internet, some are ready to take on this challenge. The best thing about this MOD is that even though you can’t form defensive pacts, you also don’t have to worry about other religions forming agreements and conspiring against you. But well, in the same way, don’t have fun yet, remember the same goes for you too.

Well, the MOD, as the name says, is all about Genetics and Heredity. The creator has used all his knowledge in science, genetics, and inheritance to make sure that the generations, lineage, and genetics are much more reliable, stable, and predictable.

When we have a MOD that changes the look and feel (Total Conversion MODs), a MOD that alters the character detailings (Character MODs) and a MOD that adds some features in the game (Mechanical MODs), then why should be lack behind when it comes to adding graphics and colors only? And so, the purpose of Cosmetic MODs is to add some graphical packs, enhancing the game features and making the player love the game even more.

When it comes to the talk of middle ages, battles, and strategies, the first thing that comes in mind is about heraldry. And so, this MOD brings you all that fun with the inclusion of shields, Armours, symbols, and even icons of Military. This creates a whole new sense of battling and strategies in the player’s mind. Not just this, the MOD also adds the crests of the Coats of Arms and a selection of shield from the thousands of them said from the customized dynasties from all over history.

Seeing from the Paradox’s point of view, the addition of a three-dimensional map was a great idea but was not sufficient to fulfill the curiosity of gamers. And so, this MOD brings you to the old but better design of a cartographic map close to a real map conference as if you are seeing the world from above and deciding strategies to destroy other empires with your advisors.

Do you love Anime? Are you an Otaku? Do you like watching animations? Well, if your answer to any of these questions is yes, you are in the right place, and this is the perfect MOD for you. The MOD brings you a whole new library of designs. This MOD brings the world of anime characters to Crusader Kings 2. It adds a library full of Anime portraits, not only a few characters but a whole lot of them for every feature you find on the game menu ranging from one-eyed character to the ones with long beards.

This MOD changes the portraits of original characters to the Anime portraits of the characters that best suits them. Not only this, if you want your one-eyed soldier to look even scarier, you can change its picture to a whole new anime character having creepy looking eye, and even a scar on the face.

So, that was all about the Best Crusader King 2 MODs. Well, there are more in the market, and you can easily find all of them on the Steam Workshop. What more do you need?  it is easy to download them from there. But well, just make sure of a few things, the first and foremost is that adding a MOD to a game changes the game. The level of change depends upon the type of MOD you are going to install.

Total Conversion / Essential MODs changes the whole look and feel of the game while adding some features to it. In contrast, Mechanical or Character MOD only adds a few features to improve the gameplay by a bit, whereas Cosmetic MODs don’t alter the game by many levels; they alone are known to add some small graphical elements to the game. So, make sure you properly understand a MOD before installing it.

Also, make sure to backup your game data in case you lost any while installing a MOD. Also, remember to check if the MOD that you are currently installing, is compatible with the MODs already installed on your system. If a MOD isn’t fit, it is not recommended to install both MODs at the same time. This can cause the loss of game files, and your game even might get corrupted too. But leaving these points, installing MODs can be pretty much fun as they add a new gaming experience to the same game you have been playing for days. So, if you have not tried them yet, why not give it a shot?