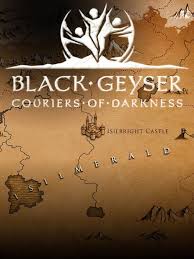 Black Geyser: Couriers Of Darkness sure looks like a BioWare game. It isn’t, because BioWare hasn’t made BioWare games for centuries. This is in fact made by a small team, yet when it goes into Early Access next month, will apparently boast real-time combat, a set of companions, and over 300,000 words of storytelling.

Successfully funded on Kickstarter in 2018, it’s fair to say Black Geyser has somewhat missed its August 2019 release date. Instead, it’s to be August 2021 and then as an Early Access game, intended to be fully complete early next year. However, it’s an RPG, so of course, it’s two years late.

Inspired by games like Baldur’s Gate and Icewind Dale, it’s clearly inviting some extremely dangerous comparisons. Yet looking at the footage in the trailer, it sure looks like a classic BW Infinity Engine game!

It’s going to have pausable real-time combat, companions to buddy up with, all that dialogue, and a bunch of lore to go with it. Ho boy, if they can pull this off, I’ll be pretty excited. It’s not like BioWare can be bothered to make proper CRPGs anymore, so someone else might as well completely lift the look and feel.

The game is set in Yerengal, where they say “dark gods have brought nothing but venality and greed,” which doesn’t sound very nice. Yet a nation called Isimerald has had a spot of peace, until, oh boy wouldn’t you know it, a civil war is brewing. How you interact with this story will, apparently, involve a “unique greed mechanic”, who I’m fairly sure did the last service on my car.

When this comes out in EA next month, it’ll have the introduction and first two chapters complete, with the second two still to come. Combat and the like is finished, but obviously will be polished during the next few months. I’m never sure whether to jump into an RPG when they’re Early Access, but I’m also not sure I can resist a game that looks this much like Baldur’s Gate when Baldur’s Gate 3 doesn’t.