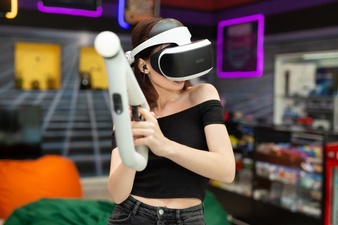 The U.S. Air Force’s A-10 Warthog pilots are now training, in part, using a literal computer game, known as Digital Combat Simulator World, more commonly referred to simply as DCS. The 355th Training Squadron at Davis-Monthan Air Force Base in Arizona is using DCS together with commercially available virtual reality headsets and other gaming Equipment which cost way too low than the price of actually flying. U.S Military sees this as an option of Training its Soldiers at a low cost which would eventually lead to proper usage of the military funds and they can spend more on the areas that are to be given more importance.

The 355th Training Squadron’s A-10 Simulator Laboratory has been using a staple of the flight simulator gaming world, including DCS, as well as Oculus Quest and Rift VR headsets, Thrustmaster HOTAS Warthog joysticks, and throttles, and Thrustmaster TPR pendular rudder pedals. The computer workstations in the lab, from Volair Sim, are specifically designed for use together with flight simulator games and their associated peripherals.

A pilot wearing an Oculus VR headset “flies” an A-10 in the Digital Combat Simulator World game in the simulator lab at Davis-Monthan Air Force Base. A top-down view of one of the training stations in the A-10 simulator lab showing the Thrustmaster HOTAS Warthog joystick and throttle and Thrustmaster TPR Pendular rudder pedals.

The unit had begun the process of setting up this training lab back in 2018 and personnel subsequently used money from a fund set aside for “innovation” projects to procure the commercial off-the-shelf software and hardware.

Davis-Monthan is a major hub for Air Force A-10 operations and is presently home to three Warthog squadrons, two of which are combat-coded units assigned to the active-duty 355th Wing. The 45th Fighter Squadron, an Air Force Reserve squadron assigned to the 924th Fighter Group, is a dedicated Warthog training unit.

“VR has proven to be a tremendous tool for showing specific sight pictures that would otherwise be impossible to show via 2D pictures and traditional academic material,” a spokesperson for the 355th Wing told The War Zone, also said that the  DCS tech was used within conjunction the currently used technology. “We are also using VR headsets for students to view 360-degree training footage, and communities all across the Air Force are starting to adopt similar platforms for multiple different career fields.”

In a video the Air Force released last year, seen below, Air Force Major Drew Glowa, a 355th Training Squadron instructor pilot, said that, before the establishment of the A-10 simulator lab, training for Warthog pilots on the ground at Davis-Monthan consisted only of a mix of “classroom instruction, computer-based training, and full-mission trainers.”

The FMSs are more traditional full-motion simulators in which there is a replica of the A-10 positioned in front of a large screen that displays an environment that is identical to what they would be facing if they were really there. Many simulators represent the identical situation in all the cabins which gives the feel of flying together with the other ones which improves the coordination and the entire situation looks familiar when doing it for real.

An A-10 pilot conducts a simulated strafing run on an aircraft carrier in one of the full-mission trainers at Davis-Monthan Air Force Base. An instructor pilot is seen standing next to the mock cockpit.

“We are using virtual reality simulation to provide an immersive trainer for students,” Air Force Major Drew Glowa, a 355th Training Squadron instructor pilot, had also said an interview for an official Air Force news item last year. “Training includes all aspects of operating the A-10 to include, but not limited to ground operations, start-taxi-take offs, landings, formation flying, weapons employment, threat reactions, air-to-air refueling, and other critical capabilities.”

“There are two distinct lines of effort in our VR program,” Air Force Lieutenant Colonel Tim Manning, the commanding officer of the 355th Training Squadron, added in a separate interview at that time. “First is the lab where students can fly the A-10 and practice tasks and the second, is having actual flights filmed in 360-degree video, viewed on VR headsets.”

The 355th Wing’s use of DCS for A-10-related training|| is quite realistic with its graphics and every single detail is present in there including all the buttons in the cockpit are clickable which gives it more realism and more authenticity which results in very proper training and with this the trainees wouldn’t be having any problem while they are in a real cockpit. DCS has a specially designed module for the training which makes it very much identical to reality.

Developed by Eagle Dynamics, which was founded in Russia, but now has its main headquarters in Switzerland, DCS was first released in 2008. DCS was an evolution of the earlier Lock On Modern Air Combat (LOMAC) series. The underlying software is free to download, but the company sells modules for the game with new aircraft and other additional features. More than a decade on, new aircraft and more, as well as updates to existing content, are under development for this highly detailed combat flight simulator.

Using DCS, “we can now demonstrate exactly what it looks like flying on the wing of a tanker and subsequently flying to the correct position behind it to refuel,” the 355th spokesperson told us an example of the training that is now available through the A-10 simulator lab. “Leveraging DCS’s impressive visuals in VR, we can have students fly and practice the correct positions themselves, which is very valuable training for a single-seat aircraft. No 2D screen can show the same level of depth perception required to accurately fly these types of close formations.”

“This prepares them for flying events better than any other training tool we have at a higher availability,” Major Glowa, the A-10 instructor pilot, said last year. “Now we can review specific tasks in a real-world environment by supplementing our four traditional simulator bays and giving students 22 more cockpits to practice on their own or with an instructor. We can expedite ground training to prepare students for flights at a pace we have never seen. We are transforming the way we train pilots and will be able to actually increase quality faster and add remedial training at almost any time. This will expedite the time it takes to get students ready for their flights.”

The ability to carry out this kind of training with a high degree of realism on the ground is especially important for A-10 units. There is no two-seat trainer version of the Warthog, which means that pilots who are new to the type have no alternative but to actually fly it for the first time solo.

The larger, more traditional FMT provides important simulated flight experience before then, but these are also limited in number and can be expensive to operate and maintain. As such, the A-10 simulator lab, through DCS and VR, also offers very low-cost additional simulator capacity.

“It’s always challenging for us with the three squadrons here to basically find time to make sure everyone’s got enough slots to get a certain amount of training done,” according to Major Glowa. “The biggest benefit for this is that you have a low-cost option to get students actually chair-flying realistic events and sight pictures that they’ve never had before.”

“You have to be able to practice as you play,” he added in the 2020 video interview. “The more we can do that, the more opportunities we have to train before we go fight the better, so this leverages that big time.

The cost savings and added capacity that VR, in general, can offer have already made this an area of great interest across the U.S. military. The Air Force, in particular, has focused on leveraging VR for simulated ground-based flight training as one way to help generate sufficient numbers of new pilots, something the service has struggled to do in recent years.

The use of VR is already expanding into other kinds of training, too. Augmented reality (AR) is also emerging as another lower-cost avenue to provide additional training capacity.

The A-10 simulator lab isn’t even the only VR-based training going on at Davis-Monthan. The 355th Operational Support Squadron has also been using VR-based simulations to help train the ground personnel to conduct various tasks.

A simulated flightline full of F-35 Joint Strike Fighters that is among the VR environments that the 355th Operational Support Squadron has been using to train ground crews.

“The 355 TRS [Training Squadron] is a key leader and trailblazer in this space and is leading the combat Air Force,” he added. “We have moved out on the Chief of Staff of the Air Forces’ message to ‘accelerate change or lose.'”

At the same time, there have already been criticisms leveled at the increasing use of simulated training, with some warning that this could leave new pilots with a worrying lack of actual flying experience. Lieutenant Colonel Manning, the 355th Training Squadron commander, spoke directly to those concerns last year.

“We are not cutting flights or flying hours in the syllabus, but instead we are using this technology to produce more lethal, efficient, and safer A-10 pilots,” he said. “Better ground training methods will result in making the most of every flight hour. It also has the potential to be more cost-efficient for the Air Force, and maybe even a faster way to accomplish training.”

It is pretty clear that the use of DCS is evidently very useful but real flight training can’t be done using this. but it’s a cost-effective method for many further projects which involve pretraining. The War Zone‘s own Tyler Rogoway had similar observations in the past regarding how high-fidelity commercial flight simulators could be used to help with training.